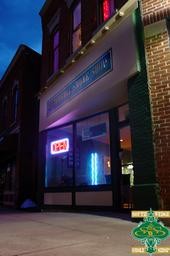 South Wedge Smoke Shop was a head shop and tabacconist in the heart of the South Wedge neighborhood near the intersection of South Avenue and Gregory St. After being open only a few months, the store closed its doors late in 2008. Initially a hand-written sign was posted on the front door suggesting it would be open by appointment only, but this was quickly replaced with another hand-written sign referring would-be patrons to an internet liquidation sale being conducted via the store's MySpace page.

The MySpace page no longer appeared sometime before March 2010.