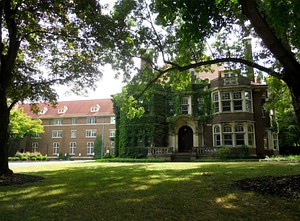 History of the Strong-Todd House

The Strong-Todd House is one of the great estates and historical landmarks of Rochester in the lovely East Avenue Historic District. The mansion was built for Henry Strong in 1902 by local architect J. Foster Warner. Henry Strong was the first president of the Eastman Kodak Company and his generosity is responsible for the buildings that house the Rochester Theological Society, the past YMCA, and the Red Cross. After his death in 1919, his daughters and long time friend George Eastman built Strong Memorial Hospital in his remembrance.

In 1926, local businessman Libanus Todd purchased the estate. During the Great Depression, he conceived a private sector plan that employed out-of work laborers to improve the residences of the affluent. The property at 693 East Avenue became the model for the Todd Plan (later known as the Rochester Plan). The landscape architect Edward G. Lawson was employed to redesign the gardens, which included new planting and the brick wall that surrounds the property today. The enclosing of the solarium, the addition of a bedroom, and painting the dining room mural were also part of this program. His plan was adopted by many cities across the country and some historians believe that it was the genesis for the public works programs credited to the Roosevelt administration.

Libanus’ wife, Nora Conway Todd, donated the mansion to the Catholic Diocese in 1948. The property became known as the Cenacle Retreat House. In 1959, a chapel and additional facilities were added. The Sisters of the Cenacle ministered to the spiritual advancement of women for over four decades.

In 1996, the property was purchased by Carey Corea and Robert Rosenfeld. Restoration of the mansion and the conversion of the chapel and dormitories into office space were completed in 1997. The Strong-Todd House is comprised of 28,500 square feet and occupies 2.75 acres on the corner of East Avenue and Oxford Street.

Currently located in the Strong-Todd House: