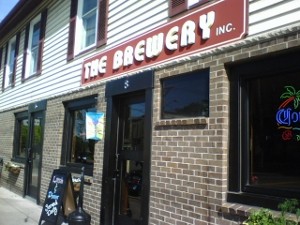 The Brewery Pub & Grill is a gastropub in Honeoye Falls. They have thirteen beers on toap. Although their selection does not currently include any Custom Brewcrafters products, The Brewery offers rotating selections from Rohrbach Brewing Company and other local, regional, and national microbreweries.

2010-07-04 10:25:34   Stumbled upon it last night, and it was surprisingly good. If you're there on a nice summer afternoon, eat on the patio. Good collection on tap, and pretty interesting eats. A late dinner might get a little buggy to sit outside. Not sure we would visit to sit inside since there are only 6 outside tables, but it's something we would chance since food was pretty interesting. —URalum

2012-01-16 18:40:51   I am a Honeoye Falls âtownieâ and regular patron of all three local watering holes (Flahertyâs, the Brewery, and, less often, Cosmoâs), as well as a former employee of CBs. While I do enjoy CBâs beers, I donât fault The Brewery for not always carrying them â The Brewery provides a nice selection of other microbrews, and they rotate their taps frequently to keep things interesting. If someone really wants to drink exclusively CBs products, then they could just go to CBs itself, or to Flahertyâs â both are right down the road. (Last I checked, Cosmoâs doesnât carry CBs, either.) Beer selections aside, The Brewery is a great place to enjoy a meal. The atmosphere is quite pleasant: in summer, you can dine outside on the patio that overlooks the waterfall, and in winter, you can warm up next to the fireplace. And the food and service are consistently good â Iâve never had a bad meal there. In fact, Iâve eaten one of the best burgers of my entire life, and I find that the pasta dishes are not only reliably delicious but also an unbeatable value. In addition to their regular menu, The Brewery offers a revolving list of daily specials, some of which are quite creative. —AJH