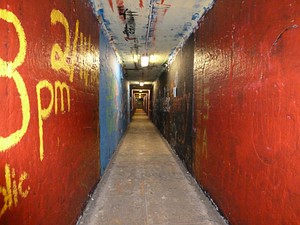 Tunnel connecting one side of the Eastman Quad to the other, loudly painted by various student groups. (Feb. 2012) 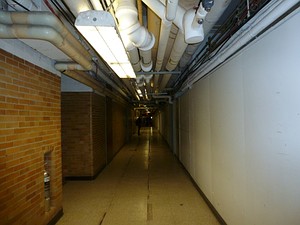 The tunnel running the left perimeter of the Quad is more utilitarian. This section is the basement of Bausch & Lomb Hall and includes several classrooms. 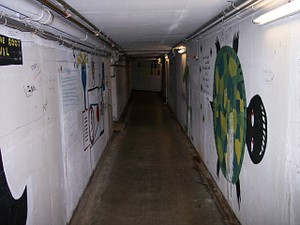 map), a system of tunnels connect many of the buildings so that students don't have to venture out into the cold when going from one class to the next. UR actually has many tunnels, including one that extends from the River Campus to the Medical Center, but this one, as well as most others, are for utilities workers only and are full of pipes and wires. However, this still leaves a sizable network open to students, faculty, and visitors.

The tunnel system is fairly unique to UR and originated in the 1920s with the construction of Strong Memorial Hospital. When the River Campus opened in 1930, it included tunnels under Rush Rhees Library and the Eastman Quadrangle, which is parallel to Wilson Boulevard. (Note: the River Campus was originally intended for the male students only, with the women remaining at UR's original Prince Street location. The Prince Street campus was closed in 1955.) Additional tunnels were added over the next few decades. Students of the past actually had access to even more tunnels than they do today. At one point, you could travel from the Towers dormitories to Sage Art Center and from Susan B. Anthony Hall to Rush Rhees Library. These have since been closed to specialized personnel only, but the tunnels connecting Hoyt, Schlegel, and Meliora Halls, as well as Wilson Commons, remain open.

The UR tunnels have an offbeat social history as well. Before hazing was finally banned, freshmen were required to use the tunnels at all times, even in good weather. Many student pranks have taken place there, including an incident in which both sides of the tunnel that crosses the Eastman Quad were cinder-blocked, forcing people to walk all the way around.

For the UR visitor, three tunnels are especially interesting to check out. The tunnel that runs underneath Eastman Quad is re-painted every several weeks by different clubs and organizations to advertise upcoming events. This tradition began in the 1970s in response to a rise in graffiti. According to a 2004 Campus Times article, the tunnel has subsequently shrunk by 2.2 inches. If the rate of painting continues, the tunnel will completely close in 1,074 years.

Another interesting tunnel is the one connecting the basement of SueB to the basement of Spurrier (where the music practice rooms are located), which is covered with artistic graffiti. The tunnel underneath Elmwood Avenue that connects the Annex to Strong Memorial Hospital is also full of graffiti dating from the 1960s and 70s that provides a fascinating window into the past.

An additional tunnel connects the Medical Center to the School of Nursing across Crittenden Boulevard. In the Medical Center, the entrance is a raised, closed door near the Courtyard Cafe, Parking Office and Pic's Place. The other end is the lobby of the School of Nursing. There used to be a great deal of graffiti about R Wing (the in-patient psychiatric ward), but since 2007 it's just a solid, ugly shade of brown.

The Rochester Institute of Technology also has a tunnel system.

For the most part, the River Campus tunnels are wheelchair accessible, with one exception. When entering the tunnels from the ground floor of Rush Rhees Library, be advised that the one branching to the left that runs under Bausch & Lomb and Dewey Halls (second photo) contains a small staircase. To get to those buildings using the tunnel system, take the tunnels branching to the right and you will come to the connecting tunnel (first photo) that will take you to the other side of the Eastman Quad. 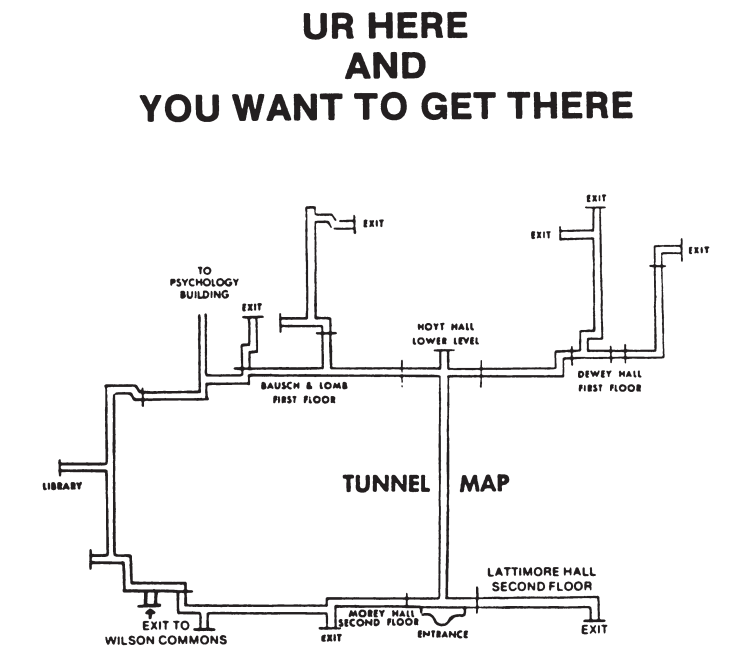