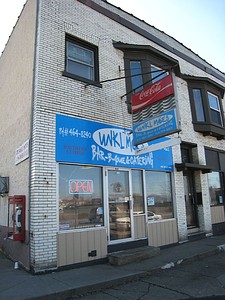 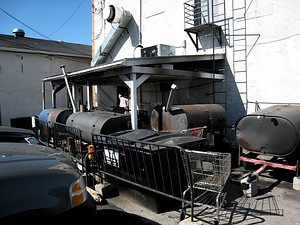 2005-09-26 12:35:31   This place has some of the best BBQ and southern food in town. If you are looking for slow cooked down-home goodness, this is the place to go. Since it's located in the 19th Ward, it's also a great place to see a different side of town. In a city that is still pretty racially divided, it's a friendly place to go that might be out of your regular routine. I went there with some friends and I was the only white guy in the place, which I think is pretty damm sweet.

They also do catering, and are more than willing to show inquistive geeks around their array of homemade slow cook BBQ's.

Great food, friendly staff and cooks, it's on the top of my list for under $8 dinners. —FarMcKon

2005-09-28 20:43:51   Race relations in Rochester is an 800lb gorilla in the room. This town is very segregated, and I find that bothersome. I live in Plex, so I live in an area that is largly black and working class, and I like it here. I'd like to encourage people to ignore the stupid invisible 'race-line' down the middle of the city. I want to make it clear that this is an establishment where people who might have some fears of the 'Other Side Of The Tracks' can feel welcome. If I the write-up can be clearer on that point, please edit—FarMcKon

2007-04-07 15:20:16   Wonderful "real thing" BBQ, forget the negative race relation crap commented by others. We often take my octogenarian, mid west, and white in laws to Moe's when they're in Rochester; their request !

Fried okra, sweet potato fries and pork BBQ anyway you want it. Anyplace else for BBQ in Rochester is just a wannabe! We drive 23 miles from an east side burb. —RonWellman

2007-09-19 15:51:20   Delicious food - the best sweet potato fries I've ever had. All the sides I've tried have been really tasty, and the portions are huge. My mom was nervous about the neighborhood, but the friendly service and food won her over. —AutumnHaag

2007-11-08 13:31:50   This place is a Gem! I never knew it existed until now. The prices are good, the portions are huge, and the food is great. I had the pulled pork with sweet potato fries and mac salad and It may have been the best BBQ I've had in a while. Plenty of seating inside too which is nice. —GeorgeBluth

2008-01-24 16:36:59   Just got stuffed to the gills today at Unkl Moe's with a friend. The service was spot on, the food was fantastic, and the price was more than reasonable (two huger dinners with two sides each and two lemonade/ice teas totaled $25).

Definately try the BBQ turkey (meat quality was great), sweet potato fries & yams (the half iced tea-half lemonade was terrific, too) but I doubt there's anything on the menu that isn't delicious. I'll have to go back and try the desserts, but today, I was far too stuffed to even think about it. —LauraKenyon

2008-05-02 16:05:09   I have visited Unkl Moe's on several occasions, thanks to a co-worker. The exterior presented itself as very unassuming. After eating there, I learned why. You don't visit Unkl Moe's for fancy frills or nifty lighting—you visit them for amazing homecooked southern BBQ. To me, the difference between something like an Unkl Moe's and a Dinosaur BBQ or a Sticky Lips, is that Unkl Moe's is off the beaten path. It's less-crowded, and so in a way, more personal. It's one of my favorites in Rochester. Everything here is homemade—be sure to try the Mac and Cheese!

I'd go here over some try-hard hoity-toity nouveau place ANY day. —VinceC

2008-06-11 14:37:38   A buddy and I are gradually working our way through all the BBQ places we can find in the area. This is only the 3rd place we've tried...we started with dinosaur and sticky lips. The food at Unkl Moes is in a completely different (i.e. higher) category than those other two. Also, the atmosphere at Dinosaur and Sticky Lips is sort of weird. If Epcot set up a "southern pavilion", it would feature restaurant much like Sticky Lips or Dinosaur. Moe's doesn't bother with all that silliness, and the food is far better. Its hard to get BBQ to taste smoky without drying out the meat. The ribs and pulled pork (we tried both) were both very moist and very smoky. I guess it's possible that they both braise and smoke their meat, but that really doesn't bother me. Also the service was extraordinarily friendly. —StuJordan

2008-07-16 18:40:29   I went here for breakfast with a church function and the food was really delicious and the servers extremely friendly. I need to go back for lunch or dinner so I can try their fabulous BBQ. —CatMagro

2009-03-14 15:42:08   Stopped in for lunch today, the place lives up to all the previous comments. Wonderful friendly people, great food, reasonable prices for what you get. Can't believe it took us so long to find and try this place ! —DottieHoffmann

2009-05-15 01:07:30   Great restaurant. Like some others say, the meat here isn't of the highest quality—my pulled pork had quite a bit of fat on it. However, the sauce was very good and the sides here are fantastic. And the service is very courteous and fast. —JohnHavard

2010-02-07 12:37:37   I am a bit of BBQ fanatic. I've made a point of sampling all of the rochester area offerings, culminating in a trip to Unkl Moe's two nights ago. I had the BBQ pork (pulled pork) with fried okra and mac salad. The pork was fantastic, tender with crisp edges covered in a sweet/tangy/spicy sauce. The fried okra was also spectacular, and the mac salad was solid (homemade). My companion had ribs with sweet potato fries and string beans. Ribs were solid, sweet potato fries were good (crispy, but slight too sweet), and the beans were nothing special.

Overall, I rate this place highly. The food is excellent, you get to avoid the fake "ambiance" of Dino and Sticky Lips (and the ridiculously long wait) and its definitely cheaper. I will still make an occasional trip to Sticky's for ribs/garbage plate, but Moe's is now firmly in my BBQ rotation. —SRudman