"Can it be done? ye ask? Does koala bear poop smell like cough drops?" ~ Tom Robbins, The Jitterbug Perfume 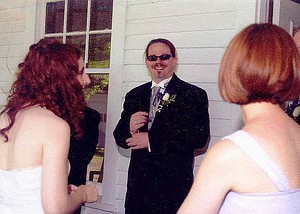 In the meat-based world, my name is Tom Belknap. I am a webdesigner who designs in PHP, CakePHP, WordPress, WordPress MU, bbPress and Drupal.

I was born at Highland Hospital on September 6th, 1974. I don't remember much, but those who were there tell me it was "pretty cool." Since then, a lot has happened. I've attended the following schools: East Rochester Elementary School, Dudley Elementary School, Honeoye Central Schools, Bloomfield High School, Sodus High School (Class of '92, History/Music major), Monroe Community College, Hochstein School of Music and Dance, and The Academy for Career Development. I am currently attending the University of Phoenix to complete a bachelors in Information Technology, Web Design.

I have worked at all kinds of factories and crap. Of note (just because) are Fleisher's Bagels in Macedon, Webster Tool and Die, and Rochester Instrument Systems. I lost my job at RiS and went to school at ACD to become an "IT guy," whatever that means. I bought DFE.net on a lark while working at The Sutherland Group as a phone jocky for Gateway Computers. I barely knew basic HTML, but I thought it would be cool to have an "about me" type website. I also worked for about a year and a half for Unisys, where I got an education on webdesign from their learning library. Worked from home for a company out of Atlanta for about ten months, then scored my current gig at Kodak.

My wife nudged me after reading this bio to suggest that perhaps I aught to mention the fact that I'd been married recently. Oh yeah. I was. To my lovely wife, Sarah Carbone-Belknap. The picture here is actually Sarah, myself and our good friend Hillary at our wedding in Webster Park. We met when I was working for a terrible, terrible company that didn't even get mentioned above by the name of CIS, or at least that's what they were calling themselves at the time. I shan't go into details about a company that doesn't deserve mention. But that's how Sarah and I met, and it's been heaven ever since.

DragonFlyEye.Net. The site is dedicated to Progressive Politics and entertainment in Rochester.

DFE.net was bought in 2004 when 1and1.com, my webhost, was giving away a promotional deal of half a gig of webspace for free. As mentioned above, it was supposed to be an "about me" website. However, after the 2004 elections, with my skills increasingly in need of new challenges, blogging becoming more popular and Air America on the radio, I was inspired to create something more.

What DFE.net is about has been a moving target over the years, but whatever its about is always about Rochester. There are sections for

food and wine in Rochester,

culture in Rochester and

technology news. I'd hoped to create a space for Progressives and personalities of note in Rochester to provide a unique Rochester voice to the issues of our day. I've recently been doing interviews, which is a trend I hope to continue.

Others have written for the site in the past, and that is also a trend I hope to continue. Anyone wishing to add their voice can do so at the authors section of the website,

A number of reasons. The first is that, as a spiritualist, the dragonfly seems to have always been a spirit animal to me. That's a difficult thing to explain to people who aren't familiar with the concept of spirit animals, but suffice it to say that they are very important to me.

The second is that, as symbols of Rochester are concerned, dragonflies are obscure but appropriate. We live in a very water-rich place that is just filled to the brim with dragonflies. That's not the case everywhere you go in the US or elsewhere, though there are hundreds of species of dragonfly throughout the world. I wanted a symbol of Rochester life that was naturalistic and unusual. No disrespect to RocWiki or other sites, but I really didn't want to use "Rochester" directly in the title of the site.

Third, and perhaps most interestingly (to me): dragonflies are one of only two species of life on Earth that are capable of truly motionless, hovering flight. The other is the hummingbird. Other insects like bees can weave from side to side and come close, but the dragonfly is capable of being perfectly still in mid-air. This, to me, has always seemed a kind of poetic vision of objective reason: to be motionless above the fray, observing without disturbing. This has been an ideal of the sort of thinking that I'd like to believe I'm capable of, politically.