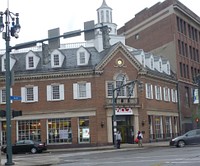 VILLA prides itself in its urban renewal efforts. They hire directly from the communities they are in and design their stores to be "neighborhood hubs where customers can sit down and watch as many flat screen watch the many flat screen T.V.s, find out about upcoming parties, purchase tickets to key concerts, listen to the live DJs (DJs spin at Sneaker Villa locations every Friday and Saturday), and talk with friends."

They have four locations in the Rochester area. One is downtown in the Midtown District. It opened in 2012. The others are in Irondequoit in Culver Ridge Plaza, Marketplace Mall in Henrietta, and Greece Ridge Mall in Greece.