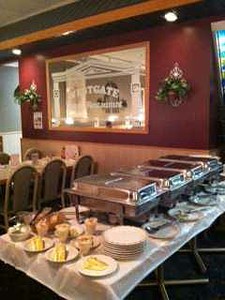 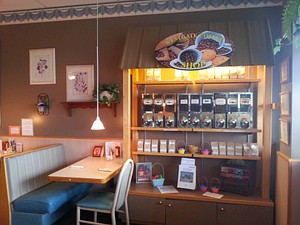 Westgate Family Restaurant was a local restaurant in Gates, near Westgate Plaza. Clean and well lit, they had different menus for each meal, which really exceeds the boundaries for traditional diners, but is typical for the area. Bottled beer and glasses of wine were served.


2007-10-23 00:38:53   We ate here Sunday morning. The blackstone eggs benedict (made with tomato, American bacon, and sliced black olives) were really good. Coffee was decent, but a little on the weak side. Service was good.

Those looking for sausage links will be disappointed; they only have patties.

A couple of cub scouts were selling popcorn at the door. —DaveMahon

Especially in comparison to the hash browns, which were obviously made from scratch and featured a hint of onion, almost achieving the level of a

latke. It was just begging for a dollop of sour cream. —DaveMahon

2008-12-10 09:15:26   As far as diners go this is definitely one of the better ones. I try to break things down to 5 main categories; meal portion vs price, meal taste, service, coffee quality, and their ability to work with potatoes. Westgate does well with all of these tasks and I'd give them highest marks in service. Where I'd rate them lowest is with their coffee as its a bit bland, but by no means would I say it's bad and I've put up with much worse at other diners. I highly recommend this place and out of the 6 -7 diners I've compared so far this is my personal favorite. —JustinB