LoudounPedia is starting to get noticed in academic circles and by other libraries, he said, but so far it’s a pretty lonely example of how wikis can be applied to local government. The city of Rochester’s RocWiki in New York is one of the few other such wikis. 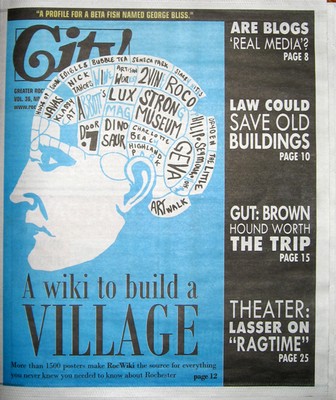 RocWiki is featured in the cover-story "A wiki to build a Village" in the May 16-22, 2007 edition of City Newspaper. Read

ROCWIKI: Everything you never knew you needed to know about Rochester on the City Newspaper website.

We were selected by the City Newspaper as the "best of Virtual Rochester" in their 2005 "best of" issue. 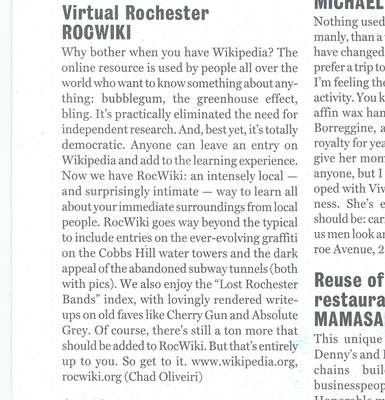 Why bother when you have Wikipedia? The online resource is used by people all over the world who want to know something about anything: bubblegum, the greenhouse effect, bling. It's practically eliminated the need for independent research. And, best yet, it's totally democratic. Anyone can leave an entry on Wikipedia and add to the learning experience. Now we have RocWiki: an intensely local — and surprisingly intimate — way to learn all about your immediate surroundings from local people. RocWiki goes way beyond the typical to include entries on the ever-evolving graffiti on the Cobbs Hill water towers and the dark appeal of the abandoned subway tunnels (both with pics). We also enjoy the "Lost Rochester Bands" index, with lovingly rendered write-ups on old faves like Cherry Gun and Absolute Grey. Of course, there's still a ton more that should be added to RocWiki. But that's entirely up to you. So get to it. www.wikipedia.org, rocwiki.org (Chad Oliveiri)