Abbey of the Genesee is an abbey located in Piffard, NY near Mount Morris in Livingston County. The religious order and abbey is a 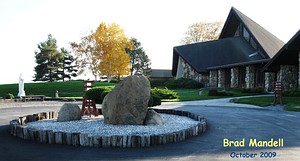 "community of contemplative monks belonging to the world-wide Order of Cistercians of the Strict Observance (O.C.S.O.) more commonly known as

Trappists. We were founded from the

Abbey of Gethsemani, Trappist, KY in the spring of 1951.

As described in our Constitutions our community belongs to ". . . a monastic institute wholly ordered to contemplation. The monks dedicate themselves to the worship of God in a hidden life within the monastery under the

Rule of St. Benedict. They lead a monastic way of life in solitude and silence, in assiduous prayer and joyful penitence. . .

The monastery is known locally for its production of Monks' Bread, which is available at the

Abbey Store and in Wegmans.

2009-11-04 13:32:16   Stopped by the Abbey on Oct 26, 2009 on the way back from a wonderful visit to Letchworth State Park - recommend you add it to your trip. We picked up a big batch of loaves of Monk's bread. We took some down to VA for my grandchildren - they especially like the Maple Cinnamon (they call it smelly bread - cause it smells so good). —BradMandell