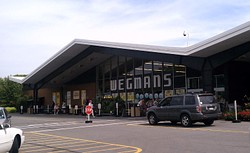 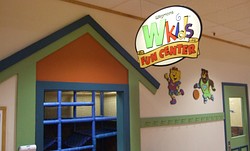 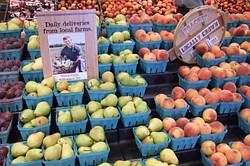 Wegmans is an institution in Rochester.

Ask someone what there is to do in Rochester, and they will mention Wegmans.

Wegmans is not just a supermarket, it's an experience. Open 24 hours a day (most locations), it offers:

The store specializes in delivering a wide selection of high quality goods at low prices. You can find $999.00/lb truffles and vine-ripened tomatoes to star fruit and plantains; Camembert to aged cheddar; orange roughy to king crab legs; bagels to Foccacia; Budweiser to Speights; egg rolls to filet mignon; Caesar salad to rotisserie chicken; fruit tarts to organic yogurt. In short, if it isn't stocked by Wegmans, it isn't worth buying.

Wegmans' produce department uses a number of local producers and features them in advertising, bin signs, and other promotions. See

Wegmans is the mecca of grocery stores, and while started locally here in Rochester by the Wegman family (most notably the late Robert Wegman and his son Danny Wegman), it is slowly expanding across the Northeast and Southeast while carefully maintaining the quality and presentation that makes it so fabulous. The Wegmans family purposefully limits themselves to two new stores per year to ensure that high standards of quality are always maintained. Nationally it has recently gained attention when it was cited in Fortune magazine as the best company in the U.S. to work for. Additionally, Businessweek ranked Wegmans #5 in its list of

Handicap Note: All Wegmans are handicap accessible and have a Helping Hands program whereby employees are available to help you check out and load your groceries into your vehicle for you. Most stores have a special area close to the entryway for special loading and unloading issues.

First timers are recommended to see Super Wegmans in Pittsford. The store is an amazing tribute to suburban shopping plazas. In addition to containing all of the above and more, it also had a built in restaurant, titled Tastings, which closed in November 2009. Folks wandered to the restaurant for a champagne brunch on Sunday, or swung by to try a delicious submarine sandwich and treat themselves to a fruit tart after. Or simply grabbed a cookie from the extensive offerings and enjoy while wandering down the aisles of options. A trip at two in the morning will expose you to the youth culture of Rochester, which comes to the store in the wee hours to buy snacks or indulge after a night of partying.

To be sure, Wegmans is not to be missed.

Word has spread as far as the North Korea Times.

Oh, and note that the name has no apostrophe.

updated their company logo to the new one shown above right

LogoDesignLove.com for a history of the logo and discussion of the change.

The Wegmans website has a clickable Store Locator 1 that shows their vast empire of 89 stores - including: 46 in New York (18 in the Rochester Area), 17 in Pennsylvania, 7 in Maryland, 7 in New Jersey, 8 in Virginia, and 4 in Massachusetts.2

Compassionate Consumers has been publicizing the conditions they discovered at the

Wegmans Egg Farm, documented on videotape and in the accounts by several participants. Wegmans may be one of the top employers to work for in the U.S., but they still keep their chickens in

In March 2003, Wegmans sent a representative to the Upper Mount Hope Neighborhood meeting who discussed changes to their Mount Hope store: they planned to upgrade it as it was one of the first stores they ever built. The plans were wonderful and would have been a great boost to the neighborhood. However, in September 2003, after starting renovations, declared they were closing the store. The reasons revolved around money: either the store wasn't profitable enough, or the renovations were too costly. Although the neighborhood suffered from the lack of a grocery store, the building eventually sold to the University of Rochester Medical Center and was converted to a parking lot in December 2005.

This was representative of bigger changes to some of their fundamental operating policies. While once they were the "neighborhood supermarket," they have now closed almost all their stores in the City of Rochester and switched to a model where they exclusively seek maximum profits. As of 2007, the only retail location inside the City of Rochester is their

Several Wegmans products can be seen on the hit television show,

The Office, starting in the Fall 2007 season. From Soy milk, to cereal, to WPOP.