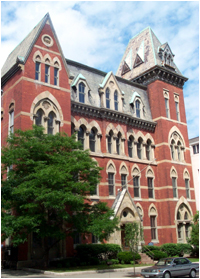 The Academy Building is a landmark building in the downtown Four Corners neighborhood that is also part of the City Hall Historic District. It is down the street from City Hall and not far from the Sister Cities Parking Garage. Previous uses of the building include the city's first school (or "academy"), the Municipal Court, the Board of Education, and private offices beginning in 1982. It is also known for being one of the sites of the old Edward's restaurant. Today the ground floor houses Founders CafÃ©.