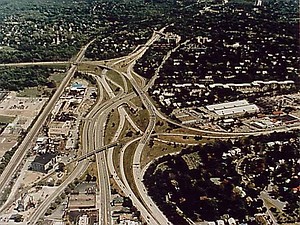 Can of Worms aerial view, circa 1964 The

Can of Worms is the intersection of 590 and 490 on the east side of the city of Rochester.

Credit Rochester reporter Mitchell Kaidy for popularizing the term supposedly coined by an engineer named Stanley Kozak. "Can of Worms" more or less faded into the history books in 1991 upon the completion of a four-year project that involved 11 new bridges and put an end to the most dangerous component of the expressway — the blending of I-490 with I-590.

Here's everything you need to know about the complexity of the project: It took $4 million to build it from 1962 to 1964 and then $129.2 million to fix it almost three decades later.