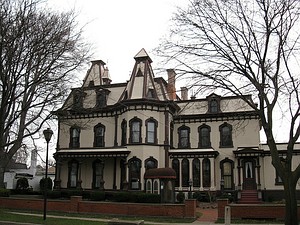 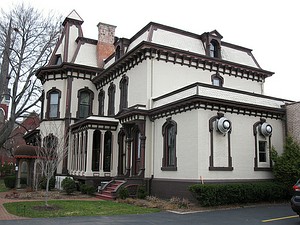 The Henry DeLand House is an historic home in the Village of Fairport. It is listed on the National Historic Registry and exhibits Second Empire architecture. It became the Green Lantern Inn in 1925. The Cellar Door opened there in 2011.

Originally built as a private residence and designed by Henry Deland, the Inn was converted to a boarding house, a tavern, a full service restaurant and is presently a banquet facility.

... Started in 1875 and occupied in 1876, it is considered to be the best local example of high second empire architecture. The distinguishing features of this style are multiple chimneys, a slate mansard roof, four square floor plan, central tower and decorative porches and spires with built in gutters and roof dormers.

... In 1925 the house was bought by Geraldine Harradine. Her sister and brother-in-law Walter and Ethel Haight turned the house into an inn with overnight guests. The Deland Rooms were used for small parties. Ethel took note of the entrance lights with the greenery and said 'this inn will be called the Green Lantern Inn'. One lantern still exists in the entrance facing Main Street.

...In 2004 the building was purchased by Matthew and Stephanie Laurence. Matthew returned to Fairport after working as the executive chef of the Harbor Court Hotel in Baltimore. The Laurences continue to use the Green Lantern for arranged banquets and corporate dinners.

Both Green Lantern and the Cellar Door closed in January 2014, however. Mr. Dominic's on Main opened in June 2014.