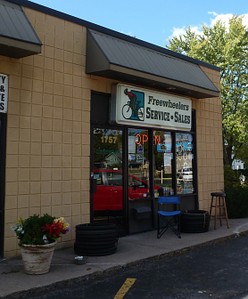 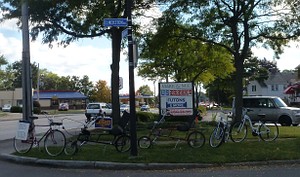 Freewheelers is a bike shop in Upper Mount Hope, close to the University of Rochester. They sell bikes and accessories and perform maintenance, repairs, and other services. They are an authorized Fuji retailer and have a wide array of Fuji bikes (Road and MTB) on display. Many cycling accessories are in stock, from seats to helmets to fenders and everything in between. They also offer free tuning for life on bikes purchased there.


2006-10-06 14:35:29   I had a loose nut on my rear hub, the guy tightened it and didn't want to charge any money. I ended up chatting for about half an hour about bikes and random stuff. They might not have the biggest inventory, but they are very friendly and don't try to screw you over. The only negative thing I've heard about them was from a friend who tried to take a $60 Walmart bike there for servicing - the owner turned them away. -GirtsFolkmanis

2006-10-09 07:20:59   I agree that the owner is quit fair. This is a great shop to stop in if you need a particular item (recently purchased a lock and pair of peddles). While it is true the owner turns away Walmart and Target type bikes - we were told it is because they are very difficult to work on as they are constructed as "disposable bikes". You would be better off purchasing a used old quality bike and having them fix it up. —EllenKelsey

2007-08-05 12:42:04   A great small bike shop. Every new bike comes with a life-long guarantee of free repairs and maintenance, and Roger, the owner/mechanic, really knows his stuff. He'll talk your ear off every time, so don't go if you're in a hurry. —OwenThompson

2008-03-04 22:44:54   I visited Freewheelers for the first time today, per recommendation of my roommate. Growing up in Rochester, and in the local cycling community, I am willing to say that Roger gave me the best LBS first impression I have had. He was friendly, passionate about cycling, and yes, we did talk for about an hour before he let us go.

The shop was modest, and although it didn't have the high end bikes and accessories of Towpath or Park Ave, I could tell that he was a competent mechanic who will take great care in servicing the components I needed help with. —JustinSchmidt

2008-04-20 12:21:30   Stopped by Park Ave Bikes today because I thought Freewheelers was closed on Sundays, and they said I wouldn't get my wheel back until the first or second week of May —it just needed to be trued.

Dropped the wheel off with Roger, he said $20 to fix or $60 to replace, and he'll call me when it's done. While I was there I ogled over the 2008 Fuji models, they shame my 2001 Fuji. I'm pretty sure I'll be going back this summer to pick up a new bike :) —ChrisLauretano

2008-05-06 13:22:32   Purchased a bike here recently. Roger took about 2 hours out of his day to walk me through the differences between the different Fuji's he has (he has another brand that he carries) and even let me and my friends test-ride a few bikes. The bike took a few days to be prepared, but I had some customizations done to it. When I picked it up, Roger then took a couple of hours out of his day to give me a few pointers on maintenance and other ins-and-outs. He offers free tuneups for life. He says that there is no too often for coming in, but there is a not often enough. A+ Service Effort. —EugeneCain

Roger, the owner, is experienced and honest. He’s very willing to share his knowledge and won’t sell you something you don’t need. Also, he’s not a bike store snob who won’t talk to you unless you are interested in top-of-the line stuff.

As to him turning away Wal-Mart/Target bikes, again, this is because he’s being up front. Frankly, Wal-Mart/Target bikes are low quality and hard to work on. Rather than doing a repair and handling the customer a repair bill that is a large portion of the bike’s cost, Roger will turn the work away.

If you want a quality bike or repair for a reasonable cost, this is the place to go. —Clipper

2009-01-23 11:28:32   The home mechanic's bike guy. I've built and repaired my own for years, but for a solid and quality build, I go to Roger at Freewheelers. Last bike purchase from him: Surly Cross Check, where he rebuilds the entire bike as part of his "free tuneups for the life of the bike" mantra. While I've done Park Ave Bikes, Towpath, Towners, Full Moon Vista, and by a long shot Freewheelers is where I go time and time again for top notch service. —JimmyMiller

2009-04-05 12:48:16   I bought a bike from Roger when he had his shop on Culver Road way back in 92' when I brought it in for a rebuild he remembered the bike and did a great job on the rebuild. Mine happens to be an Iron Horse which is no longer sold. A quality bike that he said was worth the effort to rebuild. I am very happy with it and hope to get many more years out of it! Roger is a top notch, honest mechanic with a lot of experience. I really like what he does with the installation of the cables. They will never freeze on you no matter how much it gets rained on! Dave Skiff —dpskiff

2010-12-20 14:05:01   I must protest this unfair review because the writer has misrepresented many things. Also he was very angry and in a hurry. My solvents did not work to remove his freewheel, but perhaps they later worked their way in and allowed him to remove it. I had to replace his wheel and gave him the new freewheel for free because it was barely holding together. Had he said that he wanted me to use his used parts, I would have not taken the job. I was, for the whole of 2010, working short hours due to Crohn's disease flare up and that is the reason I worked on his extremely rusty bike. Normally I would not but I was taking all jobs due to my short hours, and was willing to work cheap on used bikes although normally I would not, because there is a good chance that working on such bikes is futile. That is why I said that I needed the money; because his bike was extremely rusty. I gave him free labor, half price on parts, etc. He claims that I did not fix the correct brake, but he is remembering wrong. I did what I was asked to do. I came in way under his estimate and when he was unhappy I refunded all his money. He did not say call him for permission to do anything. I told him I would call if it went over the estimate. I did $400 worth of work. It took six hours. Rust is dangerous and hard to fight. I told him in advance that he would need a new rear wheel and freewheel because any chain that has elongated to the degree his had will cause the freewheel to form pockets higher up on the teeth and so will not mesh with any new chain. He agreed to this. He came in and stormed into the rear of the store and took his bike because he did not like to wait 30 seconds for me to finish with the previous customer. I give people all the time they need and answer all their questions and his anger and threatening mein caused me a physical reaction that burned from my gut through to my spine due to my active Crohn's. His other messages and reviews display a similar attitude; very angry young fool who thinks the world should care about everything he thinks.

2011-04-11 19:53:19   This is really a user friendly bike shop. Roger, the owner, is fair and generous with his time and expertise. It's easy to get to and provides a pleasant, low key shopping experience. Two thumbs up!! —IraSrole

2011-06-08 20:37:58   Man, I just saw Roger again, and I really can't say enough good things about this guy. I've known him for over three years now, and every time I stop into his shop, he is kind, courteous, and more than ready to help out. His prices are more than fair, and I've never been disappointed by any work on my bike. Pray for Roger when he has surgery this September. Peace. —MattSnow

2012-06-15 07:44:52   Stop in yesterday to see how it is. Looked around, Roger is very friendly and was very knowledgeable. While looking around I was happy to see a Made in the USA biking clothing for sale, which I happily grab one. Roger told me, the shop way back when used to make biking shorts, which is pretty neat. I will be stopping by again for sure. —bonnev659

2012-06-16 19:00:20   Freewheelers has been my first choice for bicycle service for years. Given Roger's patience, professionalism and expertise, it's not hard to return whenever the need arises. —JeremiahParry-Hill

2012-07-24 15:53:17   FWIW, I used to be a bike mechanic, and even though I have no love for Roger, I can attest that such 'department store bikes' are never worth fixing. They create these monstrosities out of non-standard parts which change from model to model. In the end, any such bike is best to be discarded when it breaks. Spending $150 to fix a $69 bike is pointless. You get what you pay for.... —alex-c

2014-01-27 15:01:36   Just moved back into the Roc area from south. Needless to say I had to switch my tire out for my road bike (gota love trainer season). Needless to say, went in to see Roger. Roger wasn't there as he had surgery but the guy filling in was just as friendly as Roger. Get better Roger. —bonnev659