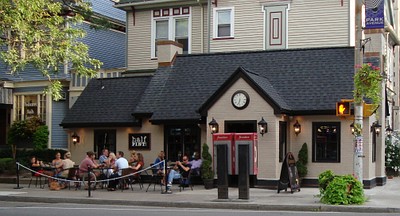 Half Pint Pub is an Irish bar on the corner of Oxford Street and Park Avenue. Its grand opening was during the 2011 Park Avenue Summer Art Festival.

Half Pint occupies the former location of Piatza's Pizza Gourmet. The original small building there was torn down in 2010 due to structural problems and replaced with Half Pint's current structure.


2011-11-05 11:33:35   Adorable little bar! Warm, cozy, inviting atmosphere and a good selection of craft beers on draft. When you order a beer, you receive it in 2 half-pint glasses. And you can choose 2 different beers, for the same price, I think, which is a nice opportunity to try new brews. I just hope this tiny place doesn't get too popular, because then there wont' be any room to move, haha! —AJH