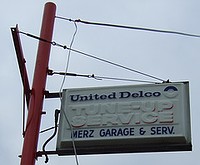 The garage has seen several owners in the last few year with the most recent purchasing the place in January 2009.

The shop occupied space that began as renovations in January 2008 from the Merz Garage and Service Shop (see photo) that closed in November 2007 after 71 years and had become quite an eyesore. The renovation included a retro style automotive garage and cleared most of the surrounding trees.


2009-03-02 12:24:53   I wouldn't recommend this place to my mother-in-law. I took a set of four wheels and tires to be mounted to them. When I got the wheels back I noticed that they were all scraped up and ruined. I called to voice my concern and this jerk tells me that "they're only steel wheels, I'll have them painted." I told him I didn't want them painted and he kept arguing with me. So I go down to show them what they did and this other guy comes out. He looked like one of those 70's TV shows wise guy types and he tells me the same thing. These guys ruined my wheels and didn't offer to do anything about it. Maybe because they just opened up they have new help or something. —JohnTWinthrop

2010-11-12 14:13:41   I have to change my opinion of this place as of late. The staff have had a bit of turn over in the last few months cause there's a different crew there now. I went there for an oil change and asked them to look at my brakes because they were making noise and they had previously done work in that area of my truck. The guy said the brakes were worn out and needed to be replaced and quoted me like $300 for the job. I did it myself and took the brakes back to AutoZone for the warranty and the guys at the store said they were still good (which I have to agree). So I don't know if the guy was trying to screw me over or just incompetent, that said I'm probably going to try to find a new shop. —DamianKumor