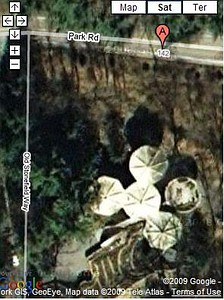 in Perinton near Powder Mills Park south of Bushnell's Basin.

2008-06-02 00:56:51   I used to love driving by this house when I was a kid (and I still do!) Definitely a must-see Rochester area landmark. If you have children, take them to sneak a peak at these and then check out the fish hatchery down the road. —MariahBetz