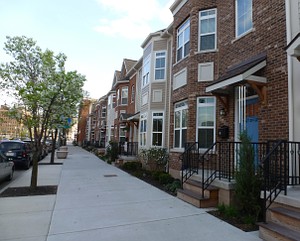 North Plymouth Terrace is a development consisting of a three-story commercial building and twenty-seven owner-occupied townhouses on North Plymouth Avenue in downtown's Cascade District. The homes are priced between $199,000 and $300,000. Phase II of the project is the construction of the remaining fourteen townhouses. As of May 2015, these are still under construction.

The site is across from the Hochstein School of Music and Dance, on the corner of Plymouth and West Main. It was completed in late 2013.


2014-02-18 09:43:55   They had a unit on the fall 2013 Inside Downtown tour. I was very impressed with the layout and construction quality, and how they managed to include a rear entry attached garage that doesn't disrupt the urban feel from the street view. —IreneAllen

2016-04-16 17:25:18   I went to an open house here today and was very impressed! Much as I love old houses, the unit was very nice and had a cute little backyard. The open house was hosted by an actual resident instead of a real estate agent and he was very enthusiastic. Apparently the entire development constitutes its own little community. —EileenF