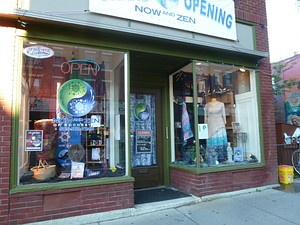 Now and Zen was also home to the

Desert Rhythms Middle Eastern dance troup, which has been performing in the region for over 25 years.

Owners Brian K. Jefferson and Laura Pothier met at the Brushwood Folklore Center Seasonal Festival. They opened their store in January 2012. Grand opening was in April 2012.

They decided to close in August 2014.