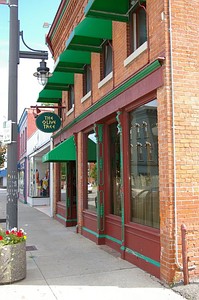 Democrat & Chronicle article on September 9, 2008 stated that The Olive Tree was closing in early October. The 29-year-old (age given in article) restaurant is being sold. The article states that another restaurant will be moving in, but it will not be Greek. No word on what cuisine it would be.

The Olive Tree was housed in a brick storefront built in 1864. For its renovation, it received an Excellence in Design award from the American Institute of Architects in 1980 and a recent special citation from the Landmark Society of Western New York (2003).The Olive Tree was conveniently located on Monroe Avenue near the downtown cultural district.

2006-07-14 23:25:33   have gone three times and have had an exceptional meal every single time. Romantic, reasonably-priced, middle-to-upscale food in a great location. There isn't anything like it in Rochester, and it trully is a gem. I have to second the above nomination for Saganaki and Bougourdi - they redefined my conceptions of cheese. —RochesterGuy

2007-04-24 16:20:40   The only homemade moussaka in town? I doubt that. I believe that Jine's makes their own, and would be surprised if Aladdin's Natural Eatery ordered pre-made moussaka. —GrahamSaathoff

2007-08-05 17:03:07   Had an excellent dinner last night. We started with an appetizer that consisted of 4 dips with pita bread. All were nicely done, but we thought the skordalia stood out. They had a strip steak on special, so I took a chance on it, even though it seemed like it might be outside the restaurant's area of expertise. I was happy to find a nice cut of meat, cooked perfectly rare (as I had requested), with a fragrant dry rub that was still subtle enough to let the flavor of the meat take center-stage. It was served over wilted greens alongside spiced and broiled potato wedges, and an eggplant and tomato concoction that the owner described as being similar to ratatouille. My companion ordered the moussaka, which she found delicious and beautifully presented alongside pilaf and the aforementioned eggplant side. Both entrees came with a simple greek salad with a tangy vinaigrette. Every bit of our meal was well thought-out and executed.
Our server was attentive, knowledgeable, and friendly, and the hostess/owner was also very pleasant. We took home some baklava, which was good, but we thought the filling to phyllo ratio was a bit too high. Prices were pretty reasonable for the class of restaurant this is, expecially considering that the entrees all come with salad and sides. Dinner for two with appetizer and dessert came to around $70 —EastSideStephen

2008-04-22 16:35:37   The Olive Tree was the best Greek restaurant in town. I miss it immensely. Awesome food and great location. Its been there forever, it must have been good! —MrRochester

2008-10-29 15:57:59   Damn. Damndamndamn. I'm really going to miss this place. Many special memories and many delicious meals. Rochester lost a little bit of class the day they closed their doors for good. —RochesterGuy