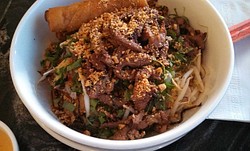 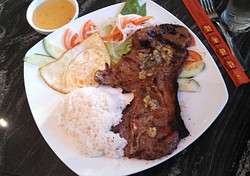 See Gone, But not forgotten

Pho Viet Asian Noodle Bar was a Vietnamese and Thai restaurant in Monroe Village. They served "banh mi, vermicelli and rice dishes, and customizable pho, along with appetizers and traditional beverages."1


2013-08-17 12:35:26   Yummy dinner there last night, sorry for the crummy cell phone photos. We will certainly be back to sample more of their menu. Very nice job remodeling the interior, it is very open, bright, and welcoming. —DottieHoffmann

To start off with, let's talk about the decor, shall we? It's a Vietnamese restaurant, a type of cuisine that normally does NOT lend itself to the 'open kitchen' concept very well (go down to New Ming's and you'll see what I mean...). So, why on earth, did they make this place to look like the set of the latest Emeril show ? Nobody really WANTS to see soup being made! And, if THAT wasn't bad enough, they had 2 giant flat-screens playing ESPN at lunch hour. And music? They were playing 'new age orchestral cover tunes'! I just about choked when they played a 'cascading strings' version of "Smooth Criminal". I would have to say that playing sports and new age music together was a.....excuse the pun....a PHO pas. Also, the air conditioner is too overworked to keep the space cooled on a hot day (probably because of the open kitchen..). Service was, on the whole, though, pretty good.

Now, for the food. The bahn mi has gristly meat and a stale roll. Worth at best 2 stars, maybe even 1.5. The bun was better, although they could give you a bit more of the sauce, considering how dry it was. Also, the food lacked.....well, it lacked general flavor. Maybe you would need to 'dumb-down' asian cuisine for your average Pittsfordite, but this is the city, so, please, give it some flavor!

Parking was plentiful (a rarity on upper Monroe), and the price was decent. This place has some potential, if they were to make the food just a bit more adventurous. Still, I think you get better FOOD at both S.E.A. and Dac Hoa. I'll try them again, but as they are right now, I would rate them slightly 'second tier' in the local Vietnamese food hierarchy. I hope they get it right.