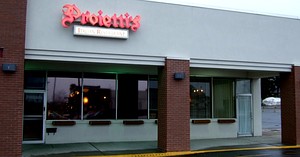 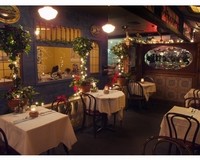 Proietti's is an Italian restaurant located in Webster Plaza in Webster across Hard Road from Hegedorns. The plaza is also home to the Webster Public Library, Starbucks, and Color Me Mine.

2007-03-30 10:38:50   Very good. Dinner started with a free zucchini appetizer which was actually pretty good despite my dislike of zucchini. We also got calamari arrabiatta as an appetizer, and it was yummy and a little spicy. The bread was delicious; I was full from the bread and the appetizers before my soup even came out (French onion—also good—seemed to be made with Swiss cheese instead of however it's usually made, though). For dinner, I got the spicy penne arrabiatta. It was delicious as well as pretty spicy (as promised). The service was great and the decor was nice. I was very pleased with my meal and will definitely be back. I was disappointed that I didn't leave room for dessert; I would have loved to try the chocolate mousse or the spumoni. —RachelBlumenthal

2007-06-18 20:23:58   You simply cannot find a finer Italian restaurant in the Rochester area. It has been in the same place for 38 years! The food is simply exquisite. The service is impeccable. The ambiance is so clean and tasteful. You cannot find a finer dining experience in the area for this price. —TomProietti

2008-04-06 20:04:36   The free zucchini starter was nice and they were able to broil some fish for my sister without oil-she's on a diet. I must say that the sauce they use does not taste home made but more like Prego. The home made chicken soup was excellent but the chicken Parm was lacking flavor-Bazil's is tastier. The small quiet atmosphere was nice for a change but our waitress was a bit grumpy. The prices are high if you compare it to other family restaurants in the area. Its ok but my husband and I will likely not return often. —RochesterPhoenix

2008-05-06 16:26:58   Pretty good food, ate there a couple times when I lived in Webster. Since there were practically NO restaurants in Webster a couple of years ago it was a choice often.

Good food, but not amazing. Ambiance is kitschy, looks like a set your HS would build for a musical.

Been around a while, was usually busy on the weekend. —MrRochester

2008-08-03 19:34:55   Camouflaged well - it's next to a laundromat in a lifeless shopping plaza - but don't let that fool you. Proietti's proved to be a very nice surprise. She liked the fettuccine Alfredo (macaroni and cheese for adults); I found the chicken riggies on the level of Utica's best. It was packed when we went on a Saturday night - make reservations. —ZachSmalt

2008-10-12 19:23:59   Ate at Proietti's last night with girlfriends. We eat there often - and it is still good even though I left my last review over a year ago. His Chicken Marsala is FABULOUS. Chicken French is excellent too.

I love Proietti's. In the barren wasteland that is Webster dining it is certainly a highpoint with a nice, mellow atmosphere (evidently redecorated since MrRochester ate there) and everything homemade and it tastes it. Service is consistent.

Highly recommended - especially if you are considering Bazils or some other place. —CindyKin

2008-12-23 15:07:29   My sister and I went there Saturday night around 6pm. Despite the bad weather and road conditions, the place was busy. Even so, we were seated right away without a reservation. The complimentary eggplant appetizer wasn't listed on the menu; it was good, a little on the sweet side. The waitress was attentive and water was kept filled. The food was good, but my crab stuffed sole ($19) from the specials menu was a little on the bland side; the potential was there, but it wasn't quite fulfilled. The final bill, including a $7 glass of wine and an appetizer, was $58 plus tip and the portions were fair (neither minuscule nor excessive, which I appreciate).

The tables were lined with paper, but the napkins were cloth. The Merlot was served at just below room temperature. Overall it was a good experience. Not spectacular, but then most of the guys in the restaurant were wearing jeans. Honestly, service was exactly what I would expect.

The only oddity was that a single fork was provided for the eggplant, the appetizer, the salad (there's an unlisted choice of soup or salad with entrees) and the entree. It felt like there were a lot of strong sauces and flavors being paired to only use one fork for the entire meal.

I would definitely go back, despite being on the far side of town from my house. —DaveMahon

The ambiance is relatively quiet. Most of the customers seemed to be our age - 30's on up, and were dressed a step above jeans and tees. There were one or two pre-teens, but they were all well behaved.

The food was great! We started with the free zucchini marinara, which was nicely prepared - not mushy, like you might expect. We followed that with artichokes French and salads. My wife had shrimp scampi and I had veal saltimbocca. Both entrees were excellent.

The service was ideal - the server showed up just when she was needed, no more, no less - just as it should be.

We'll definitely be going back. —RichMulvey

The service was OK. Nothing special, but not horrible either.

I ordered the Chicken French. While the chicken itself very tasty & flavorful, it came with a side of pasta...with red sauce. I'm sorry, but that makes absolutely no sense to me. The chicken is in a delicate lemon sauce, why would you serve it with pasta with a red sauce?? In addition, the red sauce was definitely a canned variety...or from someone who doesn't know how to make flavorful pasta sauce. Not impressed. I'm usually not one to complain about price, but IMO, $19 for what I got? A little high. I can go plenty of other places in Rochester and get a much better dish for less. And I will.

My boyfriend got the Veal Marsala. It was good, not great. And again, it came with pasta with red sauce...no sense. It doesn't compliment the dish!

I don't understand the popularity of this place. Plenty of better places around. I'll pass. —KellyT

2009-09-15 12:20:42   Went here for dinner on Saturday night and was told that it was going to be an hour wait. Decided to have a drink while we waited but alas, there is no bar! One of the staff got us a drink and pulled a table over which we felt a little weird about as we were sitting in the middle of the waiting room.

When we were seated they immediately brought over rolls and a free appetizer of zuchinni with red sauce. The zuchinni was a little bland and mushy but it as it was free, who is complaining? We ordered artichoke french for appetizer and for dinner, smoked mozzarella and asparagus ravioli with a choice of marinara, alfredo or pesto sauce (I chose alfredo) and homemade gnocchi with meatballs. The artichoke french was delicious and a good portion (7 hearts). The ravioli were delicious as well but I felt that the portion size (6 ravioli) wasn't really worth the price ($17). I was impressed that the chef acted with restraint when "saucing" the ravioli and gave them a hefty drizzle of sauce rather than drowning them. It really allowed the flavors to shine through. My boyfriend said the gnocchi and meatballs were really good but felt the sauce tasted a little overcooked.

The service was decent, not outstanding. We had to ask for clean plates for the artichoke french as the orginial bread plates were covered in red sauce from the zuchinni. Also agree with previous poster that it is odd to have 1 fork through the entire meal given different flavors. The total for a bottle of wine, appetizer, 2 entrees and a cannoli was $85. Overall, it was good but maybe a little overpriced. Would go back but can't say that I am running back... —dmarie

2010-06-02 13:32:20   I enjoy the food here, and the place could be bigger, that's for sure. I love the linguini and clam sauce and their house red wine ain't bad! One thing: twice when we were walk-in diners, we told them 2 for dinner, no reservations. The hostess (owner?) seemed extremely flustered and paced around for a few mintues. Back and forth. Back and forth. She did not explain that she was trying to work us in, despite the numerous reservations. We were unsure if her leaving us standing there for several minutes meant she could not seat us, but then she returned to inform us she could seat us in 30 minutes. Perhaps she is shy or reserved, but communicating before walking away would avoid confusion. She is friendly, otherwise. Love the food here, I see why they've been open so long. —LisaRuns

2010-06-29 12:40:06   Got here at 6pm on Friday, which is just before the rush started. The waitress we had started off pretty weak since she didn't listen well enough or long enough for my drink order, even though I am notoriously loud so hearing me is never an issue for anyone. She brought out a free zucchini appetizer with the initial set of drink orders before she even realized she made a mistake so I couldn't stay mad about it. We also ordered the squid appetizer which was excellent, like meat noodles. The dish I had was chicken bello or something. They must of put in a pound of chicken in it and the sauce was tasty. The sauce was a bit watery for my tastes but it was not too watery that it was not bad. —DamianKumor

2010-07-13 13:57:56   I got a gift certificate for a free pizza from Proietti's for moving into the area. I used it for the World Cup final, the pizza was nicely baked but the dough was a bit rubbery and the favor was not strong. You could have a nice meal with a knife and fork with it. I think, in the future, I'll stick to their pasta dishes and not their pizza. —DamianKumor