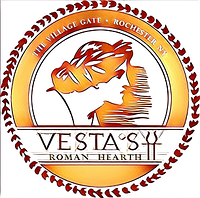 Vesta's Roman Hearth was an Italian restaurant that highlighted the cuisine of Rome. Opened February 15 2017; located in the Village Gate in the Neighborhood of the Arts. They served lunch Wednesday through Friday and dinners 5 nights a week. The kitchen was led by Chef William Hughes. Closed September 7, 2017.

Vesta's brand story read as follows: "To the Romans, Vesta was the goddess of the hearth, home and family. Her fire was the gathering place of the Gods, who sought her counsel and indulged on nectar and ambrosia. Her Roman temple's eternal flame was a symbol of the city's wealth and prosperity, and today, we bring you authentic Roman cuisine inspired by her hearth. Join us for a taste of traditional Roman fare, homemade desserts, and fine Italian wine."