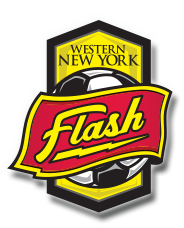 The Western New York Flash were a 2011 expansion entry in the Women’s Professional Soccer league, the top professional soccer circuit for women. In 2010, as the Buffalo Flash, they were champions of the USL W-League following an undefeated season.

The inaugural 2011 season for the Flash was highly successful. With their first draft pick, they selected University of California standout Alex Morgan. They also proceeded to acquire several top international players from teams that had folded after the previous season. This included the Brazilian forward Marta, a 4-time FIFA Women's World Player Of The Year, as well as Canadian target forward Christine Sinclair. The team finished the 2011 regular season with the best record in the six-team league, notching 13 wins with only 2 losses and three draws. Marta and Sinclair tied for the league lead with 10 goals a piece, even though both missed a significant number of matches due to their participation in the 2011 FIFA Women's World Cup in Germany.

One highlight from the season was the return to Rochester for hometown star Abby Wambach, who plays professionally for the Florida-based magicJack. Greater than 15,000 fans flocked to Sahlen's Stadium to salute Wambach and the other United States' Women's National Team players for their runner-up finish in Germany. While Wambach was unavailable to play, she did speak to the fans who came out to show their appreciation. Western New York prevailed in the match, 3-1.

With their finish in the league, Western New York earned the right to host the WPS Final on August 27 against the Philadelphia Independence. With the score 1-1 after 90 minutes and through 30 minutes of overtime the Flash won the championship on penalty kicks, 5-4.

In late January 2012 the WPS announced they were suspending league play until 2013 in order to address legal and financial issues. In March the Flash agreed to play in the new Elite division of the

Women's Premier Soccer League, consisting of a number of professional and semi-pro teams. They finished the regular season in second place with a record of 9 wins, 2 losses, and 3 ties, and defeated the Chicago Red Stars on penalty kicks 4-2 in the playoff final to take the championship.

In late 2012 the Flash were announced as one of 8 teams in the new National Women's Soccer League, which would begin play in Spring, 2013. The assignment of Wambach to the Flash by the league had an immediate positive impact on ticket sales. Despite a slow start the Flash finished the regular season in first place with a 10-4-8 record, but fell to Portland Thorns FC 2-0 in the playoff final.

On January 6, 2017, the team was sold and announced they were moving to North Carolina.

On March 7, 2017, it was announced that a new team using the same name and logo would begin playing in United Women’s Soccer, an amateur league. Home games were to be played in Buffalo.

The Flash was previously based in Erie County. In 2016 they

moved their headquarters to Rochester's Neighborhood of the Arts. Fans can stop in and buy tickets and merchandise. The team office is also located here.