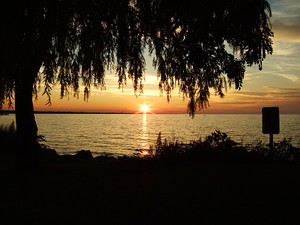 The Bay Side Pub was a local cash only waterfront restaurant/bar located right on Irondequoit Bay in Webster, NY. You could dock your boat right out front. Every Wed night was BBQ night but get there early! They offered a full menu of sandwiches and salads and of course BBQ. Live bands on Sat nights.

Directly across from the Pub is the small Sandbar Park operated by the Town of Webster that offers a great vantage point for enjoying the sunset. The town bought the land where the Bay Side Pub is to expand the park. There is discussion to place a building in the park for a future restaurant. The current owners of the Bay Side Pub are interested in working with the town to re-open in that new building.


2010-05-19 07:59:25   Nice view of the bay and nice location. Food was ok, and service was a bit slow. The regular's are kinda creepy....white trash creepy....not dangerous creepy. It is not as bad once the deck is open, then you don't have to hang out with the regulars. Very small inside and the bathroom is gross. My girlfriend went into the ladies room and refused to use it. Not good for watching any kind of sporting event. They have maybe 2 TV's that are old tube TV's maybe 20" in size. If I were you I would look at the bay from this location, and then go drink or eat somewhere else. —RobRadley