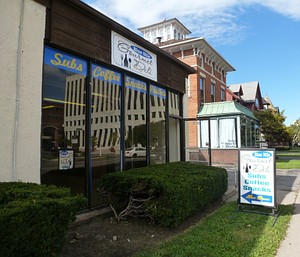 Blue Nile Gourmet Deli was a deli and convenience store in the Alexander Neighborhood. They offered Boar's Head products, as well as sandwiches, subs, and coffee.

Blue Nile opened in September 2012 as part of the redevelopment of the Alexander Park site. The building is owned by Buckingham Properties and has several apartments upstairs.


2012-09-09 17:03:47   Does anyone have a photo of the wolf mural that used to be on the front? I can understand why they painted over it (it was pretty cheesy) but it would be interesting to have for historical purposes. —EileenF

2015-04-25 16:20:19   Thanks for not forgetting. Too bad the city of Rochester and the neighborhood association gave me a nightmarish time and the run around for around two years filing one variance after another to no avail. I just couldn't afford fighting the local government from handicapping this business venture. I wasn't even allowed under the zoning code to even sell potato chips. I mean even subway sells potato chips. I had to hide a few boxes on the back shelves. What a shame. I lost my life savings and more in a city that doesn't appreciate or encourage small business. I did also sense a little bit of bigotry during the process in which they always gave me hope that my variance will fall through. But to all those that patronized this shop and supported me in my efforts I say thanks and I will remember the friendly faces. Too bad it had to end due to mismanaged city officiating and tops of neighborhood associations that are not too kind to those that don't look like them. —NaderThabet