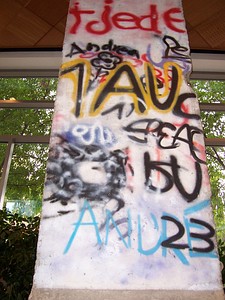 Every Wall Falls Eventually was the name of a piece of the Berlin Wall that used to be on display in the food court area of the Bausch and Lomb Headquarters. It was installed there in 1995.1

Careful scrutiny of its display revealed traces of an amusing story: The slab was authentic. The graffiti was not. A misunderstanding led to its surface being sandblasted clean prior to its acquisition. This did not correspond to the wishes of Bausch & Lomb, who had hoped to bring to Rochester an authentic piece of the wall for display. It arrived blank. In response to their disappointment, Bausch & Lomb commissioned a local artist to recreate the graffiti on this section of the wall from archival photos. Study the photos accompanying its display and smile. While the artist came close, it is clear the reproduction is not exact.

In 2013 Bausch and Lomb was purchased by Valeant Pharmaceuticals. In November 2014 it was revealed that the slab had been quietly given to a CEO in Switzerland as part of a business deal back in August.