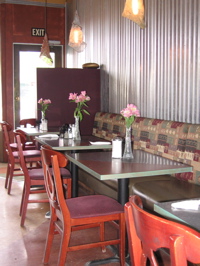 First Taste was a restaurant on Park Avenue.

... is temporarily closed and will reopen at a new location

"They will probably not be reopening anytime soon if at all. It is very unfortunate, I loved working there and the food was fantastic. I talked to the owner a couple weeks ago, he informed me that the owner... of the... building would not renew First Tastes's lease, there fore forcing it to close."


2006-08-03 19:02:52   I had a terrible dinner here. The service was abysmal and the food was absolutely tasteless. This was shortly after they opened, so maybe they've improved, but I certainly won't be going back anytime soon! —RachelBlumenthal

2006-09-29 05:04:04   The most amazing breakfast I've ever had which was sausage & their specialty pancakes. I've had many great dinners here and my favorite is their Cajun tuna steak sandwich and their peanut butter shake. Definitely in my top 5 restaurants of all time. —TravisOwens

2006-11-14 00:44:58   something needs to be explained about this restaurant - the food is yummy but things just take longer. the food is cooked to order for every single dish and most of the time, it will take some extra time to get your food. the chocolate milk, milkshakes and specialty coffee ..etc. is made by the server so that takes longer because they are juggling more than one table. it's a laid back place that tries to cook healthy because they do not fry anything! —RollerGirl

2007-01-07 09:56:05   first taste has fantastic breakfast. the poached egg Parmesan and the banana fosters pancakes are really good. the menus a bit pricey, but you can get decent eggs for a couple bucks. the lunch menu is less impressive, but still good. —EdmondToub

2007-02-19 10:35:41   Ate breakfast here yesterday. I thought $8.25 was a bit much to pay for a frittata, but it was very tasty, with loads of fresh vegetables, fresh basil, and excellent (homemade?) sausage. The kitchen was all out of apple-walnut pancakes (The chef came out to apologize for the shortage, which was nice of him), and my companion found her replacement banana-walnut pancakes tasty, but nothing special. She also noted the skimpy cup of syrup. The hash-browns were made of a thick chunk of mashed potatoes instead of the usual shredded potatoes. Interesting concept, but poorly executed - the dish was a little bland. It was a bit expensive for breakfast, but I thought it was interesting to see how a little creativity can dress up boring 'ol eggs and pancakes —EastSideStephen

2007-04-01 10:52:55   I like this place. Went today for breakfast and the bill for both my companion and myself was only $16.00 after breakfast and drinks. Once I went here for dinner, during a snowstorm. and the waitress gave me a cookie that she had warmed in the oven. Small things like that make you much more appreciative of a place. —KimBee

2007-06-06 21:15:01   I've liked everything i've ordered here except the wheat pancakes. They were very dry. Only offering maple syrup is a major plus though. —OdalisqueRise

2007-08-17 08:17:07   Reynold's Auction hosted an auction of restaurant equipment there a week or two ago. I suspect they are seriously gone. It's too bad because most of their food was good ... just their marketing (i.e. making people aware they existed) was amiss. —JasonOlshefsky

2007-08-20 09:00:56   First Taste has closed for now. According to a friend who spoke with the owner, they are going to reopen in a different location. They will let us know when and where that is. As soon as I know, I will update this page. Let's not delete this page just yet. —BadFish

2007-08-21 16:18:04   I actually loved this place. It's cheap. The location is great. I look forward to Sunday brunch on Park Ave every week. And the eggs-over-easy are just what I like. My co-brunch-haver says their pancakes are good (I don't eat those having an irrational aversion to cinnamon, and the chef added it twice even after instructions against it). The staff is very helpful. I like sitting outside - to look at people, but there's ample indoor seating (because everyone sits outside). I think the restaurant has moved downtown somewhere. No clue where. Does anyone know - your brunch is on me? —SukanyaBasu

2009-01-05 15:28:35   I moved to Phoenix Arizona three years ago and am very sad to hear the news. At one point I had the recipe for the garlic sauce on the cajun chicken sandwich. Seeing that I'll not be able to have one at First taste again, I would like to duplicate this here in AZ. Anyone know the garlic sauce recipe? —RandyHuckabone