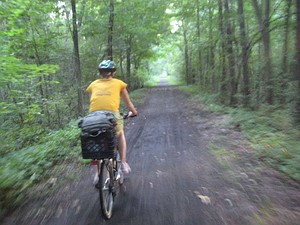 If you were to combine a thruway and a state park, you would have a greenway. It is still being developed and expanding, currently crossing through Monroe, Livingston, Wyoming, Allegany, and Cattaraugus counties. It follows the abandoned Pennsylvania Railroad track bed and Genesee Valley Canal.

The paved trail runs south along the river from the canal to just after the airport. Then, you have to ride on the side of busy Scottsville Road for about 2 miles. Take a right on Jefferson Road, and you pick up the trail about 1/2 mile down on the left. The old rail bed intersects Jefferson Road directly, and the entire bed is raised several feet above the surrounding area. The trail is not smooth. Although there's a lot of fine black gravel stuff, there's a lot of 1"+ diameter rocks, so you should probably take a little air out of your tires. But it's just about completely devoid of people for at least the first several miles. —ChrisMaj