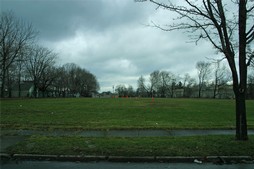 The Haloid company was founded in Rochester in 1906 to make photographic paper. But it is perhaps better known for purchasing a technology developed by Chester Carlson to make copies on plain paper in 1947. The process is now known as xerography and the company would successively change its name to Haloid Xerox in 1958 and to Xerox in 1961. The company would move the majority of its manufacturing operations to a new facility in town of Webster in the early 1960's. The building was demolished and replaced with a park (see the photo).


2010-04-08 07:48:24   I am old enough to have actually used Haloid photographic paper. I liked it as much as the Kodak, and thought some types of it gave better renditions than Kodak of the equivalent contrast rating - but the chemicals and paper back then were so variable that may have been a coincidence. When they stopped making photographic paper and went to Xerography, I thought they must have something really important lined up to drop the photographic paper line. But I was only a child, so who invests from that point of view...? (Variables, for those who were not around for the old photo stuff: age of paper, storage conditions before use of chemicals and paper, oxidation, temperature, water quality, light spectrum in the enlarger/printer, probably more.) —JackGreenky