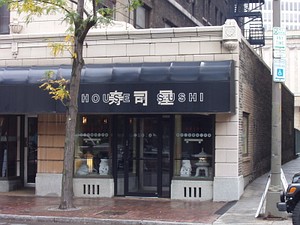 The owner also owned the Golden Port, which is located right next door. You could order off of both menus from either restaurant. The building is called One Eleven on East.

2006-09-20 17:47:51   After I was told California Rollin' had the best sushi in town, I was really depressed, and I definitely never expected to find sushi as good as House of Sushi. Everything was great; the eel roll was the best I've ever had (and I've had a lot of sushi), and the decor was pleasant and tranquil. I was so happy to find great sushi in Rochester! —AliMcGhee

2006-12-12 17:12:07   Sushi was poorly rolled and falling apart. Uninspired. Funny how some of the rolls on the menu are totally stolen from another sushi place. Their chef was slow and had nothing but bad things to say about california rollin, which was very unprofessional of him. I do like their dim sum, almost as much as the dim sum at Cantonese House. Crab rangoons and dumplings are better here at golden port though. —JoeBeef

2007-02-05 15:57:21   Went there 2/3 for my niece's birthday dinner—great food and VERY attentive staff. Only concern was the waitresses got confused between the menus and brought my vegetarian sis-in-law Mushoo Pork when she clearly ordered something different. It was quickly resolved though. —PeteB

2007-03-21 00:35:36   Above average food, though I agree with the comment on how the sushi does seem like it's falling apart at times. The waitress got our order confused as well. Still, not bad for a pre-Eastman show dinner. —WegmansFiend

2007-03-22 18:16:55   I went here and had thir Nigiri. I was shocked when the "chef" took out pre cut pieces of fish and simply put it on to pieces of rice. This is akin to having a pre cooked steak at a steak house and having them just warm it up. I've been to every Sushi restaraunt in Rochester and this is the only one I'v eseen do this. Also as JoeBeef mentioned their "chef" went out of his way to bad mouth California Rollin. That is extremely unprofesional and I am shocked they have doen it not to just me but to other customers as well. And just as with the pre cut Nigiri this is the only Sushi restaraunt I have ever been to that has bad mouthed competitors like that. I definately won't be back. —JakeBurgholzer

2008-01-17 08:48:07   After my first visit, I was quick to decide that this was my favorite sushi spot in Rochester. I've since changed my mind somewhat. Here's a couple of lists of positives/negatives, in no particular order:

Positives
1. The fish is usually fresh (see comments below for clarification) and the pieces are the right size, neither too large nor too small. The fact that the fish is "pre-cut" should not be a deterent. This is now a common practice in many sushi restaurants, even reputable ones in larger cities. What's important is that it was cut for that particular shift, and that it has not begun to dry out at the corners from sitting around all day.
2. They have a nice sushi and Japanese menu. The roll selection is respectable.
3. The atmosphere is comfortable and clean, in contrast to a NUMBER of popular sushi spots in Rochester.
4. They offer a few mid-quality dry sakes served cold.

Negatives
1. The waitresses don't seem to know that their restaurant has two menus. On one occasion, when we asked for a sake list our server said there was none. When we informed our server that we had seen one n the past, she didn't even bother to ask her coworkers for help.
2. Some of the specialty items are decidedly less than fresh. For example, I was assured by my server that the Uni was indeed fresh. What a recieved was practically rancid. It's the first time Uni has nearly made me gag.
3. On a separate occasion, my wife and I ordered toro, which never seems to be available. It wasn't... at least until the end of our meal, when they suddenly "got some in". We got two, inexpertly cut pieces of frozen, oily tuna that we had to let thaw for 15 minutes before we could eat them.
4. A lack of skill is evident in many of the ngiri and maki preparations.
5. The miso soup is sub-par and may even be a powdered mix.