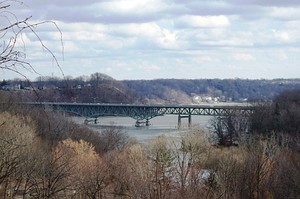 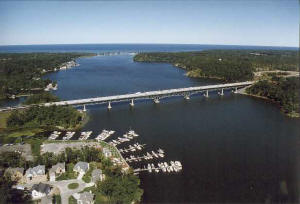 An aerial view of the Irondequoit Bay Bridge.

Built over a period of three years, from 1967 to 1969, the Irondequoit Bay Bridge is a 6-lane bridge that spans Irondequoit Bay from Webster on the east to Irondequoit on the west, carrying Route 104. It is the longest bridge in Monroe County.

From 1997-1999, a three year reconstruction project was completed. This $17 million project included removal and replacement of the entire bridge deck and guide rails, new lighting, bike paths, and landscaping.1

In 2012 a $14 million rehabilitation of the bridge was started. While this work was occurring in 2013, the bridge was found to have structural issues with 8 of the 84 crossbeams that required the closure of the two outer lanes. 2