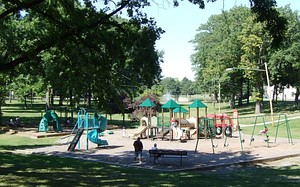 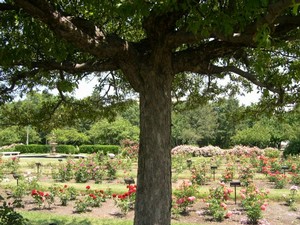 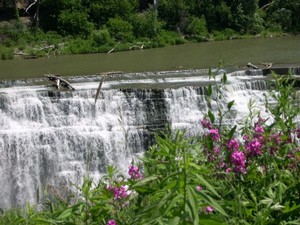 "one of the original parks laid out by Frederick Law Olmstead to highlight the Genesee River and stretches out along 2 miles of Lake Avenue in the northwest quadrant of the city. ... Features include a nationally accredited Rose Garden, scenic views of 2 waterfalls in the Genesse River Gorge, trails along the river bank, a large play structure, a pond for fishing, and tennis courts. ...

Maplewood Community Association has enhanced the enjoyment of the park. Volunteers built the playground more than 10 years ago and continue to maintain it.

There is a park area at street level, along with some Rose Gardens and a set of paths that descent onto a flat along the Genesee River Gorge.

In June of each year, the rose gardens are celebrated with the Maplewood Rose Festival.

If you are up for some off-trail hiking, you can jump the fence on the walkway headed down into the gorge, and head north along an old railroad bed that is well worn. After about 200 yards, you will reach a fence. If you follow the path, it will wind down it will take you down around a outcropping (it is slippery, and a bit dangerous), and then it winds down along the water. After wandering past a few fire pits and piles of garbage (from the local homeless who live there in the summer) there is some nice woods. Hidden by the gorge, it's almost like being in the middle of the country. If you are watch, there are many hawks in the area, and in the spring you can hear them wheeling around in the sky keening.

IMPORTANT WARNING: That area is sometimes flooded by planned water releases from the dams upstream. If you hear some kind of siren (I believe it blasts 3 times), calmly and quickly work your way up ground, above the level of the power plant access road on the other side of the gorge. Every few years a fisherman or someone gets washed away accidentally.