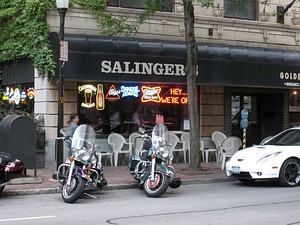 Salinger's is a bar in the East End. They have 22 beers on draft and are famous for their cheap-to-refill plastic mugs of beer. Entertainment includes pool table, electronic darts, buck hunter, and an Internet jukebox. Sports are shown on two high definition televisions.

The building is called One Eleven on East and houses apartments and several other bars and restaurants.

Baked & Carved had opened in January 2011 in an adjacent space accessible only through Salinger's where one could purchase sandwiches, soups, and fresh breads. However, Baked & Carved has since closed as of April 2013.


2006-12-23 15:25:42   You can actually get a decent beer here (read not just Labatts, but craft beers too) for a few bucks during their happy hour. Check out the specials on the board. Too crowded for me on a Friday or Saturday night...very little room to move around and almost impossible to get to the bar. —DeniseElliott

2008-08-07 20:26:51   Perfect place to end up on a not-Friday-or-Saturday evening. Room to move around, pitchers of peanuts, and beer. I've read the above complaints of overcrowding and was leery of ending up there, but indeed, I had a place to sit on a Thursday evening and that's what I'm after. Daily specials vary; on Thursdays, cheap beers are $1.50/pint and not-as-cheap beers are $2.50/pint. Their televisions display SD programming with the gray bars on the sides, which is a sign of quality. Men's room has two urinals without partition and a toilet cubicle; patio is the front sidewalk, which allows smoking but forbids glass.

The jukebox had no

2010-11-19 08:02:12   They've just recently added space on the East side of the building, adding tables, and what appears to be a spot to prepare food. A sign on the wall states that in December, food will be appearing. —MerCDotes