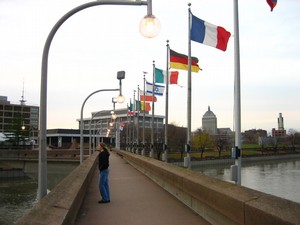 The bridge was little used and in disrepair. Fortunately as part of the ROC the Riverway plan, the plaza and the bridge are being rebuilt. The current plan includes an amphitheater along the river and a completely renovated bridge and park area. Completion is scheduled for end of 2023.


2005-11-18 17:45:48   The flags and plaques here are currently in considerable dis-repair... You can see the tattered flags in the image. And the handrails are covered in bird droppings, etc. It needs a little work done. —AndrewWheeland

2012-04-28 19:31:29   The whole area is neglected and the ugly modernist design isn't helping its appeal. I know the park isn't used much but since it's still there, the city needs to do a better job maintaining it. —EileenF