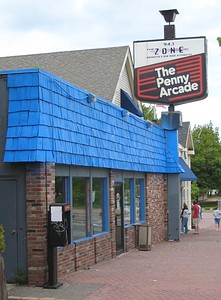 Opened in 1973, the Penny Arcade was home to performances by many local and national metal and punk bands, as well as various cover bands. They had a 40-foot bar, and was located on Lake Avenue near Ontario Beach Park.

The Penny Arcade officially closed doors in October 2009. The final concert/show the venue held was on October 18, 2009 with Run Marty!, This Is A Stick Up, The Have Nots (Who were replaced by Intrinsic), and Free For All.

The Penny Arcade re-opened it's doors under new management in early-March 2013, with a new name: "Lakesiders Sports Bar". The bar does not put on concerts/shows, though the stage and sign(s) still stand inside. On top of the stage sits a pool table for customers to play billiards on.

2008-04-17 12:47:50   The Penny Arcade should regain it's foothold in the Rochester Music scene due to a change in ownership recently. Nancy and Todd are due to bring it back to it's glory days. —JeffGerew

2015-10-27 12:51:28   My college roommate's first weekend in Rochester, he went to a show here, and there was a homicide in the parking lot. That was his first impression of the Rochester music scene... —alexandergartley

Also , you and me and a dog named Boo.