Canals use locks to deal with changes in elevation (water runs downhill). They are essentially big tanks with doors on each end. A hydraulic system is used to fill and lower the level of the water in the lock to allow vessels to move from one elevation to another.

The present Erie Canal has two locks in the Rochester area, Locks 32 and 33. These are modern locks that were not part of the original canal but were built later when it became the New York State Barge Canal. Here is a view of Lock 32 in Pittsford (courtesy DRosenbach and Wikipedia): 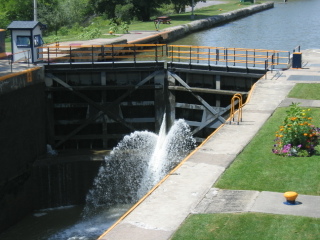 However, there are two original locks that can still be seen today. The first one is adjacent to Interstate 490 near Winton Road in what was once known as the Widewaters area. This was Lock 66, by the original numbering system. The adjacent residential area is now known as the Lock 66 Neighborhood. See a view of the old lock below: 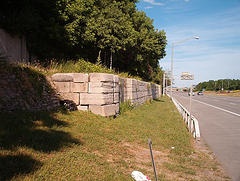 The other original lock is slightly less visible, hidden on a trail running from French Road in Pittsford behind Pittsford Plaza. This is the old Lock 62 which is part of a Pittsford town park, Lock 62 and Erie Canal Trail, that few seem to know about. More of this lock is intact than Lock 66. You can get a much better idea of the size and construction (and you don't have to park on the side of a busy highway). See view below: 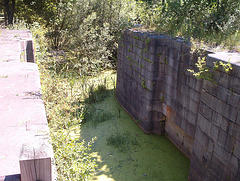 There is still a section original Erie Canal existing here, running from where the new Southern route begins on the present canal past Lock 66 (ends somewhere near the old Spring House). It's overgrown with weeds and other vegetation, but it's still there.