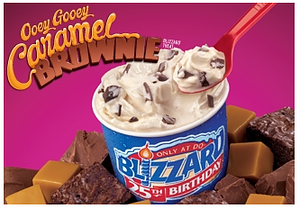 Dairy Queen is a national chain ice cream parlor and restaurant. They have two locations in the Rochester region, one in Greece and the other in Henrietta, near Henrietta Plaza. The

next closest DQ is in the Village of


2010-04-16 17:42:04   Long time fan of DQ - the Blizzards are great, my favorites include the Butterfinger Blizzard and the Cappuccino-Heath Blizzard. Hoping an investor takes note (:>) —BradMandell

2012-08-01 17:24:17   Wow, I can't believe people are getting so excited about a national chain that serves artificially flavored and colored custard! I mean, Mc D's serves custard that's about the same, and their burgers aren't nearly as greasy! —alex-c

2012-08-01 17:34:49   Please stop being so friggin negative Alex-C. Alexander and Bonne—I'm with you. Pleased we're getting one. I would suggest waiting and trying it before judging it. —peteb

2012-08-01 21:28:04   FWIW, I've been to DOZENS of DQ's in the midwest, south, and west coast. In most small towns, you either have a Sonic or a DQ (maybe a Rax) as the "2nd tier fast food place", usually down the road from the McD's or the Shoney's. In most of the Midwest, they are in the rear of a large gas-station/convenience store/fast food joint. There ain't NOTHIN' special about DQ, aside from their huge advertising budget. Just another place for people to stuff their faces with too much fat and sugar. —alex-c

2012-08-07 12:30:26   I've been to many DQ's and I enjoy the ice cream, it's ice cream not custard and really like the chocolate shell and sundaes. No need to fight people. Sure it's loaded with fat, sugar grease what have you but so is the beloved Garbage Plate and Abbott's. Not like we are eating this stuff every day. Enjoy everyone! —NewtonNola

2012-09-07 11:24:52   Here's a novel idea for people like alex-c: refrain from commenting on a location unless you've ACTUALLY BEEN THERE. An informed opinion is certainly more constructive than an unbased one. —mbetush

2012-09-07 12:09:54   I agree, another novel idea is ignore his reviews because they seem to all be negative, I'm not crazy about chain restaurants either but I'm not above hitting one up for a quick bite, even if it's not locally-sourced or organic. Sometimes, I need the grease. —PDub

2013-01-19 19:15:17   Rude managers, I don't like how the co-workers are treated they work very hard. Managers are so rude! Addie, that works there she's very quiet and cool she greets the customers & everything. The blizzards are great. Especially the manager Krista, she's disrespectful. —AmandaPerez

2013-12-16 13:24:27   It may be greasy and fast-food quality, but I love their Flamethrower burger. It's got a spicy sauce with a nice kick to it. Plus, there's no better way to wash down a burger and fries than with a Blizzard! —alexandergartley