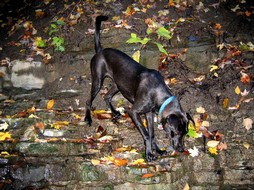 Rochester's first official, off-leash dog park is located in Greece Canal Park. Dog parks are also planned for Ellison Park, Durand-Eastman Park, and Genesee Valley Park. See the sites below for more info. The location in Greece Canal Park (and presumably those yet to open) are "community regulated", i.e. there is no authority figure in the park and rules are enforced by fellow park goers. All dogs must be licensed and registered at the Parks Department office at 171 Reservoir Ave (in Highland Park). As of early 2012 (this editor's estimation) a code is needed to unlock the gate to the park.

It remains to be seen if the establishment of official dog parks leads to a greater number of citations being issued to those who allow their dogs to wander our parks unleashed, which is common practice in Monroe County with little currently done to discourage it.

Dog owners still tend to congregate in other areas throughout the county. To be perfectly clear: Legally dogs must be leashed in these areas, and off-leash dogs are discouraged in these locations. Proceed at your own risk. Below is a list of locations:

2006-01-24 02:15:42   Be on the alert at Durand-Eastman! Our dog was recently kicked very hard by a man who said he was bringing mace next time. Our dog walked up to him wagging his tail and we told him verbally that he was friendly beforehand. Afterwards the man (a thin older man) complained about the dog poop, that when he jogged there dogs have nipped at his heels in the past, and that the 3 year old that was with them had been knocked down twice in the past. None of this was by any of the dogs present, he just decided to take it out on ours. :-( Don't hesitate to call the police on this man for Animal Cruelty, the law on Physical Abuse is clearly against him. (see

my blog for more info) —TravisHardiman

2007-08-17 13:18:26   Where on earth can you take your dog to an enclosed space around Rochester to play? We're driving our new lab puppy to Syracuse when we want to let her run (the Wegman's Good Dog Park is awesome). Any suggstions for safe off-leash puppy time? —KatrinaFromRochester

Paws in the Park Dog Walk will have a Big Dog (3 mile) and Small Dog (1 mile) walk. There will be a DJ, agility demonstrations, door prizes, vendors and more.
The walk is Sunday, September 23rd, 2007 at the Roundhouse Pavilion, Genesee Valley Park. Registration begins at 10:00am and the walk will start at 11:00am. All proceeds will go directly to the dog parks. Please bring your dog to this event to raise funds for a great cause. If you have further questions about this event or would like a pledge form, please email: mcdogwalk@gmail.com

As an active member of Friends of the Monroe County Dog Parks I am happy to answer any questions you may have about the dog parks. I would also be interested in other comments or thoughts on the dog parks. We also have a newsgroup at yahoo where we share information (rochesterdogparkgroup in yahoogroups) if you would like to keep up to date on our efforts. —AbbyBaisley

I skateboard with my dog and Cobb's Hill would be great except for the fact that anything with wheels is not allowed on the path next to the reservoir and the roads are a bit too hilly and have cars on them anyway. Ellison's paved paths are too rocky and sandy.
***Edit — 12/27/07 — New info: Rollerblades may be allowed at the park. It seems there may be a city wide ordinance against skateboarding, but not rollerblading. Also of note, I have seen several people skateboarding on the Cobb's Hill Res. path without being hassled by the cops who were close by.
Thanks in advance. —BadFish

2009-03-07 23:42:46   Washington Grove is undergoing a restoration due to severe erosion of trails and other issues related to invasive species, depletion of understory and problems with the regenerative health of the current oaks. Please avoid running dogs off leash while the grove undergoes this important restoration. Thanks. —doodadmen

2010-02-10 09:27:04   I live about two miles down the road from Durand-Eastman Park and use it several times per week, all year round. My complaint, however, is the irresponsible dog owners who use the park, as well. Now, don't get me wrong, I LOVE dogs and most animals; I have two dogs who I love like my children, and BOTH of whom I LEASH when I bring there, even though they are the friendliest hounds in the world. Let's get this straight, DURAND EASTMAN IS NOT A DOG PARK!!! Yes, it is thought of as such but it is ILLEGAL TO WALK YOUR DOG/S OFF LEASH REGARDLESS OF THE SEASON!!!. I am not afraid of dogs, but when I am jogging and I come upon a group of 2-10 people walking their dogs, I am not fond of being jumped on or barked/growled when I am minding my own business and trying to get some exercise. What's worse, however, is that these groups of people block the entire path road, run in all directions to leash their unleashed dogs (which cut me off, as well, BECAUSE THEY ARE ILLEGALLY OFF LEASH). ALSO, I am tired of stepping in dog poop that these same irresponsible owners are too lazy, uncaring, and selfish to pick up. Furthermore, I have been rushed by American bulldogs, bull mastiffs, German Shepherds, rottweilers etc., and even though I put up with it (because I realize it's not the dogs' fault,but rather their irresponsible and selfish owners), I know that many people are afraid of dogs, and children could be and have been knocked over by them. Just because you know your dog is friendly does not mean strangers will automatically feel at ease just by you pathetically saying "he's/she's friendly"; think of other people who use the park, and don't ruin things for responsible, smart dog owners. For those of you dog owners who are thoughtful, responsible, and law-abiding, this rant is obviously not toward you, just to the ignorant, selfish, irresponsible dog owners. I saw a lady get a ticket for having her rottweiler and German Shepherd off their leashes deep in the park (Log Cabin Road), and I was applauding the cop for punishing her for this careless, selfish habit. —phaceless

2010-12-27 19:42:29   We just finally got a dog for our son. She's a cute, smart Boxer! So, Greece is the only place that has a leash free dog park? What good is that? C'mon, Irondequoit, let's get a REAL dog park for us dog owners; do we really need a double decker bus to watch lions at the zoo? Nope, I don't think so. Put monies towards a dog park please. —Jeanine

2010-12-27 21:44:26   Expect a second park to open in Ellison park in spring 2011. The dog park in Greece and future dog parks are funded entirely by donations and registrations, so put your money where your mouth is if you want to see a change. —Rufus

2012-06-09 10:09:29   Just got my permit and paid my first visit to the Ellison dog park. There are two separate fenced, somewhat bare areas for big and small dogs. But there is a beautiful space for dogs of all sizes that encompasses a great swimming area and lots of parkland. But what good is a dog park when unregistered dogs and owners are able to enter and are oblivious to the rules. My small dog was rushed at the entryway by unsupervised large dogs. There was aggression between dogs- again no owner available— and dog poop left around. There were perhaps a couple of dozen dogs there and only a few had the green tags signifying they had paid for their permit and been apprized of the rules. An enclosed area is much less sanitary and safe than an open area — and if the permits aren't enforced the park provides no advantage save avoiding fines. I hope they plan to enforce the permit procedure. We are asked to "self-police"— no way am I approaching strangers with large rambunctious dogs to remind them of "the rules" when I am in the minority.

2012-06-10 02:34:49   But you'll whine to a bunch of strangers online. Do you expect someone else to be the police of the place? As a paying member it's your responsibility to be the police for the park. Guess you're lucky there's a jerk like me that'll tell someone the rules. I was at the park Wednesday and it was pretty clean to me, and everyone had tags that I saw. —Damiankumor

2012-06-11 09:05:00   There will be a lock installed on the gate soon. you should have the combination on your paperwork Jansu. I have found that people pick up after their dogs but there is only one waste can at the front. People put the waste in the bag and then leave it on the ground do take with them to the can when they leave. For the most part this place is great. One suggestion i would have is to raise the water level in the pond and maybe add airation. Maybe by raising the water level it would help with all the mud. Just a thought. See you all there —NewtonNola

2012-07-07 22:07:25   FYI, I was in PetSaver earlier this week and they have a program that "rewards" good dog owners. If you bring in your registration/receipt for the dog park and fill out a form within 30 days of registering, they will send you a $25 gift certificate to their store. A pretty sweet perk, in my opinion! —dmarie

2012-08-15 13:30:07   Has anyone had the wonderful experience of being ticketed for your dog off leash? If you fought the ticket, how did it go? I know someone who is going to fight the charge against them and is curious about the process. If anyone has a story to share it would be appreciated.

2012-09-04 21:44:08   I'm curious as to why you or someone you know is trying to 'fight the charge' in regards to having a dog off leash. You now have 2 dog parks in Monroe, with more to follow. If you're still letting your dog off leash in a public park, there's no real excuse anymore, and a ticket is well deserved. —jimjt

2013-05-18 11:01:07   I recognize that it took a decade of work to get just one dog park open, but it's pathetic compared to parks in other cities. The site in Greece is a fenced in gravel pit with absolutely zero shade, locked with a code so no visitors may enter. I have been to dog parks in Pennsylvania, Maryland, NOVA and DC, they all have grass, trees, and no lock on the gate. They have no admission fees, no weird dog-park ladies playing supervisor. And every one was clean, the dogs were well-behaved despite the open admission. The Greece park has the atmosphere of a prison camp. —Rufus

2013-11-28 10:41:08   Anyone know if it's possible to visit the dog parks once or twice before becoming a member? I'd like to give it a shot with my pup, but don't really want to pay $25 with no idea what the other dogs are like. (I've been to dog parks that have been great, and others where the aggression levels were out-of-hand and totally un-checked) Would current members understand this rationale, or just accuse me of freeloading? —jillgresens