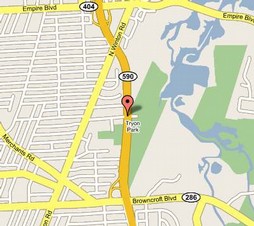 A map of the area surrounding Tryon Park 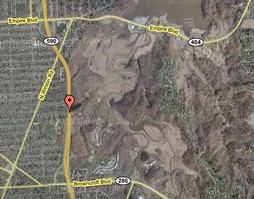 A hybrid view of Tryon Park

Tryon Park is a Park operated by Monroe County and located in Irondequoit on 82 undeveloped acres. See also the nearby Tryon Park West for more organized athletic activities.

Tryon Park is one of the hidden delights of the city of Rochester. It doesn't receive much press and a lot of people don't even know it exists, which makes it one of the best secluded dog walking or hiking areas in town. The park is 82 acres of woods on the edge of the city, with the bay bordering the north. It's mainly accessible from a little side street called Tryon Park of off North Winton Road, but there is also an additional entrance elsewhere in the park. The Tryon Park entrance is on a dead end residential street with parking available in a recently (2010) created parking lot just past the little bridge that runs over I-590. The gates are closed by Monroe County Parks officials at closing time every day, so park on the bridge if you are afraid of being locked in.

There are a ton of trails (not all of them obvious). Most were created on an uncoordinated basis by hikers and mountain bikers prior to the park formally allowing mountain biking in May 2011, and since then the Genesee Regional Off-road Cyclists organization, GROC, at the behest of Monroe County Parks, creates and maintains the formally recognized trails. They are always seeking volunteers to assist with trail maintenance and new trail creation.

If you enter and head west you'll hit the marshes and be able to see the bay. Go east and eventually you'll hit civilization again and come across the second entrance. It's possible to wander for a solid hour without seeing much of anything other than trees and creeks, something you can't say about most other parks in the city. There's one particular creek that runs all the way through the park and I still haven't made it to the end yet! The trails are rugged, so bring sturdy shoes and grab a walking stick from the forest. There are lots of craggy hills to climb and glistening rocks to leap over.

There's also plenty of weird old litter in the park. I have no idea how half the stuff I see in there even got there. Tractor trailer tire perched atop boulders in the middle of a creek? You tell me. If you want an adventure, try to find the abandoned skeleton of a car that's buried somewhere out there in the woods. If you see any obvious trash try to take some with you on your way out. It's a gorgeous wooded area, but it's gone to sprawl and could use some loving care. 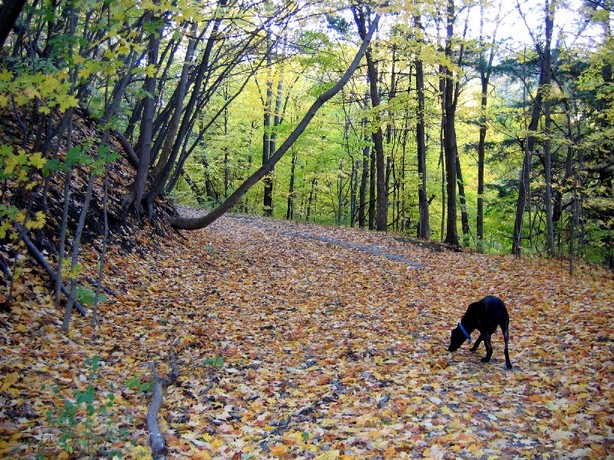 2007-08-05 12:45:49   The city seems determined to hide this park from passersby. There's only one entrance, via Tryon Park St., which has a dead-end sign and no mention of a park beyond that dead-end. The entrance is often covered by snow in the winter. Beautiful place, though. —OwenThompson

2007-10-10 00:26:56   I did find the abandoned car back there. I don't know what it was about the 40s-70s, but people just parked cars out in the woods to get rid of them. There are a number of cars in the woods in the rural areas where farmers would just leave them. —JohnJoseph

2008-05-23 11:51:19   i love tryon park, i only live 2 blocks away and i pretty much go there every day. never that many people there, just watch out for bikers sometimes they coming flying down come of the trails. if you are up to a challenge, there is one trail that you can walk and it will take you all the way to ellision park. hope to see some fellow dog walkers down there —michael

2008-05-23 14:15:47   Regarding all the random large trash around the park, I heard last weekend that that area used actually be a dump. That came from someone who lives in the area. I know a lot of the area was a farm and so open that you could see Lake Ontario from the area just north of Browncroft. —BadFish

2008-08-16 12:19:32   Just went today with a couple friends and three dogs: had a wonderful time traipsing 2.3 miles up and down and up and down around the perimeter of this park. NO ONE was there except one guy with a couple pits. Great place to go with dogs. I plan to go back in winter, when the leaves drop, so I can see the marshes into Irondequoit Bay. Beautiful, magical place. —KatieSchmitz

2009-03-02 11:53:36   Does anyone know what became of the recent public hearings over user-group conflicts (specifically bikes and dog owners) in Monroe County parks. There was talk of constructing separate trails systems for bikes and walkers in Tryon park. It would be a shame to see one or both user groups restricted because of a few isolated incidents. —ErikReinert

"2009-04-23 17:42:36"   CAUTION: There is a girl who runs through this park wearing a florescent vest that will kick your dog if he/she is not on a leash. She kicked my great dane hard enough to knock the wind out of him. —DavidPesce

2010-04-10 22:32:20   I just went there for the first time since winter. Are they doing improvements on the park? There is now a driveway and what appears to be a parking lot on the north side of Tyron Park (the road) just past the expressway. I don't know if its for the water authority who has a presence there or if its development of the park. I also looked like they had removed that big abandoned pipeline that ran through a section of the park. —JohnJoseph

2010-08-05 17:03:25   My grandmother used to tell me that this park was part of my great-grandfathers farm! If anyone can share some local info I would appreciate it! Thank you. —SamuelGrath

2011-04-29 12:27:33   Tryon Park is currently part of a mountain bike trial period for the Monroe County Parks dept. Unlike all other parks in the county,mountain bikes will be allowed here. The nearby Bay West park (AKA Abraham lincoln) is also part of this trial. This site says Sept. 3, 2010 was the start of the 18 month trial period.

2011-06-30 21:34:04   These are the best trails in monroe county. I like mendon, but you can spend an entire day in here. If anyone runs ultras like myself, you can easily run for at least 6 hours without finding all the trails. Extremely challenging for runners, and very scenic and peaceful. Tryon Park is becoming my "home course". —Termine

2012-10-11 16:37:14   Is there seriously no mtn. biking in Monroe county parks? I see no signs to that effect in my local park (Oatka Creek). I ride in it all the time, but was recently accosted by some batty woman as her awful dogs were trying to get off the leash and kill me because according to her "bike riding isn't allowed here". Just curious. —TravisLC

2012-10-11 20:27:02   Yes, there is truly NO MOUNTAIN BIKING ALLOWED in county parks. Some of us hikers and skiers prefer to not be run-over while trying to enjoy nature. Also, bike tires cause serious erosion. The only reason I can see as to why Tryon is so heavily used by MTB-heads is that it is probably the least used park locally. FWIW, unleashed dogs are also illegal in all county parks (and completely banned on several trails in Mendon Ponds). Try to respect the wishes of others. Ride on the roads, or else find a quarry or sandpit to get dirty in. —alex-c

2012-10-12 08:43:55   "Tryon Park is currently part of a mountain bike trial period for the Monroe County Parks dept. Unlike all other parks in the county,mountain bikes will be allowed here. The nearby Bay West park (AKA Abraham lincoln) is also part of this trial. This site says Sept. 3, 2010 was the start of the 18 month trial period.

Tryon Park DOES allow mountain biking, it is the only one in Monroe County. They go to great lengths (like at Dryer Road) to design the trails to prevent erosion.

2012-10-12 08:45:19   Despite alex-c's typical inflammatory protestations, the situation is just not that black-and-white. There has been a move afoot to allow mountain biking on specially marked trails in selective County parks - in fact there was an 18-month trial period starting about 2 years ago. (See greif's comment and associated link above) Now the 18-month trial period seems to be over and I have seen no definitive follow-up actions from the County formally allowing or prohibiting mountain biking in these locations. However, if you go to the County Park's web-site cited above for Tryon Park one of the included "Park Activities" is "Off-road Cycling" (which I equate to mountain biking). So, for now, I would think one should feel comfortable mountain biking there - note that it is NOT listed/allowed at Oatka Creek which was the essence of TravisLC's original question. However much it pains me I must agree with the spirit of alex-c's further comment that ALL trail users should use good sense and etiquette at all times. —jgerek

2013-11-14 12:48:34   My GF and I recently moved into this neighborhood, so we went to check out this park that we had never heard of before. Wow, what an amazing hidden treasure! You would never imagine that so much wild space could be tucked away in an area like this. The terrain is beautiful, full of ridges and valleys, and many trails that you could spend hours walking. It's a lot like the hilly part of Ellison Park towards the back. We saw perhaps 10-15 other people while we were there, including joggers, people walking and a couple pairs of mountain bikers(who weren't blazing down trails or riding dangerously, by the way). This seems like a great spot to go for a walk and to bring a dog. We'll definitely be back much more often, as this is one of the best spots to get a taste of the outdoors in the city. My only lament is that you can hear 590 through much of the park and there is a bit of litter like tires and such, particularly close to the parking lot and that area. Otherwise, you could think you were in the middle of a state park trail.

2015-05-26 16:51:58   If you take the entrance by MacGreggors in Webster, you can find what is supposedly the remnants of an old city. I'm not sure what is part of that and what it not. There is an old brick entrance fence that has fallen over, there is the base of some type of a building, and some other stuff. Random sets of steps all over the place. —DE

2017-07-26 05:19:28   I grew up on Dalkeith Road, a stones throw from the entrance to Tryon just over the expressway bridge. We spent many, many weekends running allover that place. Those were great times! We had a toboggan run we called the "Snake" and in the summer it doubled as a bike racetrack. By the way, we wrecked many a sled and bike on those rides!! LOL What a great place it was to grow up around! —flyerfan56