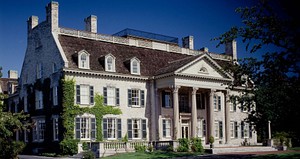 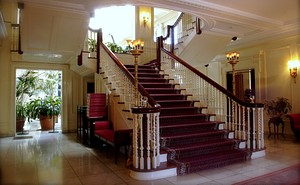 Interior view of the George Eastman House. Photo by 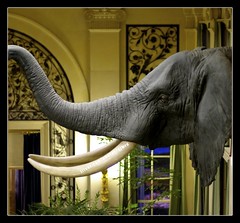 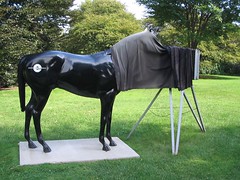 Unlike zebras, the horse doesn't require incontrovertible visual evidence to overturn a call on the field. (by Flickr user magnusdigity

George Eastman Museum is the former resplendant home of Eastman Kodak founder, George Eastman, from 1905 to his death in 1932. Upon his death, the house was donated to the University of Rochester and was the home of University presidents and their families until the end of World War II. The house then became a Museum of Photography (originally George Eastman House Museum of Photography), housing a fantastic collection of not only photographic art, but also ephemera, movie memorabilia, and movie prints. Today, the George Eastman Museum is one of the world's leading institutions in photographic preservation and conservation. In 1989 the house and museum were expanded to include a vast underground climate-controlled vault and exhibition space, while the house proper and most of the gardens were restored to the condition they were in when Eastman lived there.

A major part of the museum is Eastman's 35,000 square foot colonial-revival mansion. Many of the "public" rooms have been meticulously restored and now feature many objects original to Eastman himself. Visitors currently enter the mansion from the rear. From the main entrance (which sits inside the original garage, stables, and service areas of the home), you first enter the Palm House (now used as a seating area for the museum's eatery, Open Face) and then travel down the colonnade which features beautiful views of the Terrace Garden. You then enter the mansion proper through the Dining Room, and can freely roam through the Conservatory, the Billiard Room, the Library, the Living/Sitting Room, and the grand staircase hall. Other rooms on the first floor unavailable to the public include the mansion kitchen and several service areas. Currently, there are no plans to restore these areas, but instead, to transform them into gallery space to focus on the life and legacy of George Eastman (

On the second floor of the mansion Eastman's mother's bedroom suite has been restored, along with the entirety of the second floor hall. This floor also contains gallery space discussing the history of photography (which features a walk-in camera obscura) as well as a look into Eastman's life 100 years ago. Other rooms on this floor serve as storage, staff offices, as well as housing some of the massive amount of pipes and mechanics for Eastman's Aeolian pipe organ.

The third floor of the mansion (originally bedrooms, servants quarters, Eastman's private laboratory and screening room) is closed to the public and is mostly staff offices. Tours of this floor, the attic, and the basement are reserved for special members-only events.

After purchasing the 8.5-acre East Avenue property in 1902, George Eastman hired architect J. Foster Warner (1859–1937) to build a Colonial Revival mansion based on the design of the Root House in Buffalo, New York. Warner, Eastman, and landscape architect Alling S. DeForest (1875–1957) created an urban estate complete with working farmland, formal gardens, greenhouses, stables, barns, pastures, and the 35,000-square-foot, fifty-room residence made of reinforced concrete. Fire safety was of the utmost importance to Eastman. Not only was the home made entirely out of steel and concrete, but many heavy metal fire doors (designed to look like wood) were installed between rooms.

In 1916 Eastman purchased an adjacent property, demolished the mansion that sat there, and hired Rochester architect Claude Bragdon to design the West Garden. The garden provided Eastman with a beautiful view from his bedroom window, and originally included another small garden (the peony garden) and a yard for laundry. The original greenhouses had been built directly behind the palm house, but were moved to the west side of the property after the expansion. In the place of the original greenhouses, Eastman planted a garden specifically for cutting and creating bouquets to decorate his home.

In 1919 the Conservatory, originally built as an equal-sided square, was set to be enlarged. Eastman felt an oblong space would provide better acoustics and cut the entire mansion in half and slid the rear wing of the home back nine feet. The project took three months and cost more than twice the price to build the entire estate.

As part of the original design of the home, an aeolian pipe organ was installed. The console was set in the conservatory while the pipes and ranks rose into the third floor of the home. In 1917, Eastman installed a second pipe organ (installed in the North Organ Chamber, what was once a very large bedroom suite) with the dream of experiencing surround-sound in his home. Along with the conservatory expansion, his dream was realized: the organ shakes the entire house when it is played.

While the original organ had 132 ranks, the north chamber was destroyed by fire in 1949, shortly before the museum opened. Thanks to the generosity of one Dr. Richard Zipf, who in 2012 donated his Opus 1345 organ, along with funds for its shipment, refurbishment, and installation, the house now boasts 106 ranks and more than 6,000 pipes. The organ is now played fairly frequently, with almost weekly concerts.

The museum includes the Dryden Theatre, a 500-seat movie theater named for Eastman's niece, Ellen Dryden. The Dryden exhibits rare treasures from the Eastman Museum and other film archives almost daily. Screenings range from early masterpieces like Buster Keaton's The General, complete with live band accompaniment; to modern classics like the Coen Brothers' The Big Lebowski; to foreign, experimental, and avant garde cinema. The Dryden Theater is one of only a small handful of theaters in the world equipped to project nitrate film, a now rare and very flammable type of film which uses, among other things, silver nitrate to create images.

In 1989 the museum had been operating out of Eastman's mansion for 42 years and had outgrown the space. A massive archive building (called "the archive building" or "the 1989 building") was added on to the back of the complex. It consists of three floors (two of which are underground). On the ground level, a large peristyle with soaring cathedral ceilings connects three galleries. The Main Galleries consist of three rooms and house major exhibits. The Collection Gallery houses items and objects from the museum archives and are generally organized around a particular theme. A third gallery, the Project Gallery, houses smaller exhibits.

From the peristyle, one can look through a window into a light well that shows all three floors of the archive building. The floors include climate-controlled archive space, a research library, a

film school, and various spaces for photography and archival processes.

To make this project possible, Eastman's cut flower garden was excavated and the garden is now actually a roof-top garden called the Library Garden. Prior to this expansion, Eastman's childhood home had been placed on this site. When the archive building project was realized, the home was moved to the Genesee Country Village & Museum, and it now sits in their

In 2020, the museum moved the main entrance of the complex from University Avenue, to directly adjacent to the Dryden Theater. Now, visitors enter the center of the complex. The

Thomas Tischer Visitor Center is a beautiful new welcome hub. It is fully accessible and houses a museum shop, a new museum eatery, a concourse with introductory videos about George Eastman and the museum, as well as a "multi-purpose hall" which frequently features a short film exhibit.