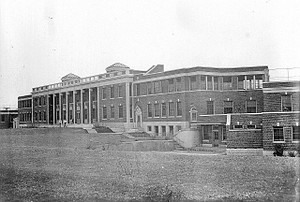 The Iola Campus was a piece of Monroe County-owned property at the intersection of Westfall and East Henrietta Roads, across E. Henrietta from the Monroe Community Hospital. The former location of the county's Tuberculosis Sanatorium, the buildings were put to use by several different county agencies over the years. By the turn of the century, most of the buildings on the campus had been abandoned, and 28 acres of the property were sold in 2004 to

Anthony J. Costello and Son Development. The property is now the site of Costello's mixed-use CityGate project (including the region's first Costco store).

The large number of abandoned buildings on the campus were attractive (and fairly accessible, though not legally) to urban explorers, but with the exception of the power house none remain now that CityGate is in place.

Photos of the Campus


2008-07-11 08:49:56   Hey, If anyone knows, what is that smoke stack building in front? I've driven past that place so many times but never knew what that building was for —CoasterFuelPhil

2010-04-04 14:11:10   Does anyone know how long this place has been abandoned? We found a 1998 phonebook on the first floor, but the amount of decay suggests it's been empty for longer than that. —BrendanCahill

2012-01-31 13:52:26   I bit of digging showed this to the the Iola Tuberculosis Sanatorium. Here are a few links, the first one containing photos of the building of the sanatorium in 1911, and the second some contemporary photos:

2013-09-02 09:41:32   A friend and I decided to explore campus a little and there were asbestos signs posted everywhere. Everything is completely overgrown, but the building is beautiful. —CBS