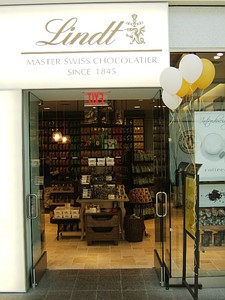 Lindt, which "announced last year that it will close two-thirds of its retail boutiques in the United States, will leave Eastview Mall by the end of January [2010], mall officials said."1

Lindt Chocolate described both a top-rated chocolate made in Switzerland since 1845 as well as a company retail outlet in Eastview Mall. The store is just inside the updated Entrance 2 - near P.F. Chang's and Champps.

Lindt Chocolates were recently rated at the top of the list by a well-known consumer review magazine. The chocolates are available online as well as through Target, Tops, and Wegmans. 2


2009-04-15 10:40:58   Lindt Chocolates have color coded wrappers (see the wikipedia article) for type of chocolate and nuts/flavor. We were especially lucky to have Swiss client that brought them to us as gifts (before airport security stopped them). The truffles in the US are made in New Hampshire and are not quite as good as the Swiss originals. In any case they are top notch. —BradMandell