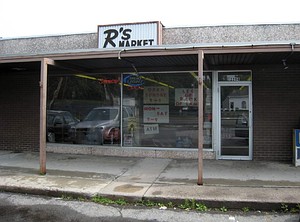 R's Market is a small grocery store on Monroe Avenue just south of 12 Corners in Brighton. They have been in business since 1961.

They sell their own meats and sausages, a large selection of craft beer, local gourmet favorites and some in-season vegetables.

R's initially closed in December 14, 2014. According to the Democrat and Chronicle: "Citing family issues, including an illness and having to raise two young children, the owners [Jason and Sarah Myers] decided they could no longer put in the hours necessary to sustain the business." R's was shortly afterwards purchased by Kevin Herrick, however, and will be reopening on May 4, 2015.

2013-06-14 10:38:30   This place just keeps getting better. They still have some of the best steaks and homemade sausage around, and now they have a growler station with 6 microbrews on tap in addition to their packaged beer selection. When you just need a couple groceries it sure beats fighting the crowds at Wegmans! They also carry local specialties like pierogies, ravioli, cookies, etc. And they now ACCEPT CREDIT CARDS. —erksor