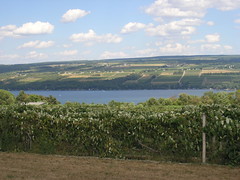 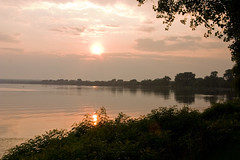 Seneca Lake is the largest of the Finger Lakes located 46 miles southeast of Rochester. Accessible from I-90 and Route 14 as well as Routes 5 and 20. Stretching from Geneva on the north to Watkins Glen in the south, the shores of the lake are populated with vineyards and wineries and its waters are famous for trout fishing.

Excerpt from "Persons, Places and Things In the Finger Lakes Region" by Emerson Klees1

Seneca Lake was named for the Seneca Indian Nation, one of the six nations of the Iroquois Confederacy who used to inhabit the area. The word "Seneca" is derived from the Indian name "Assiniki," which means "place of stone" or "stony place". Seneca Lake has the steepest shoreline of all the Finger Lakes, particularly at the southern end.

Two of the main inlets are Catharine Creek at the southern end and Keuka Lake Outlet, which becomes an inlet at Dresden. The flow from many ravines goes into the lake, some of which have spectacular waterfalls, including the falls of Big Stream at Glenora, of Sawmill Creek at Hector, and the Silver Thread Falls on Mill Creek at Lodi Landing. The lake is also fed by many springs along its bottom. Seneca Lake outlets into the Cayuga-Seneca Canal, which joins Seneca and Cayuga Lakes at their northern ends.

Seneca Lake is the deepest and widest of the Finger Lakes. Due to the large water volume, Seneca Lake has a pronounced moderating influence on the air temperature around its periphery. This is the principal reason that the lake has evolved into a prime grapegrowing area.

Seneca Lake is rated as an excellent lake for fishing and is particularly known for lake trout. The National Lake Trout Derby is held every Memorial Day weekend on the lake.