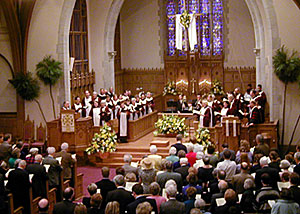 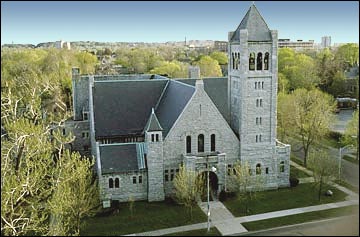 Third Presbyterian Church is a beautiful stone church on the corner of Meigs Street and East Avenue in the East Avenue Historic District. It has served the Rochester community since 1827. Their first building was located on the northeast center of Main Street and Clinton Avenue. Their current structure was built in 1894. Major renovations to provide full accessibility were completed in December 2010.

Third Presbyterian has a long history of commitment to social justice. Beginning in 1903 Minister Paul Moore Strayer was extremely active in community issues and wrote a column for a local labor union paper. Mary Paris, a trained social worker who arrived in 1917, founded Rochester's first Girl Scout troop. In 1953 Elder Lilian Alexander introduced a resolution asking the General Assembly to open the ministry of Word and Sacrament in the Presbyterian Church to the ordination of women, which was achieved three years later thanks to her efforts. Third Presbyterian is also part of the More Light group of Presbyterian congregations that are committed to full inclusion and acceptance of LGBT individuals. Third Presbyterian performs same-sex marriage, offers a support group called Born This Way!, and participates in Rochester Pride Week.

They are part of the Presbytery of Genesee Valley and serve as a Host Congregation for RAIHN.

Images courtesy of the