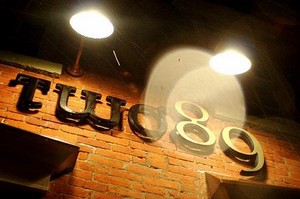 Two89 was an upscale dance club and martini bar on Alexander Street. The inside was newly remodeled, featuring two bars (downstairs and upstairs), a small dance floor, and a variety of seating options. Flatscreens behind the bar and dancefloor run videos along with the music. They featured DJ's several nights a week spinning a variety of dance music.

Closing was announced in


2007-06-17 14:44:31   At this place, it appears that both the male patrons and the club staff expect the females there to be obliging to the men who try to grope them. If there is a situation where a woman is trying to keep an unwanted advance away, the club and those who work here seem to side with the man - if he complains about her unwillingness (for example, by lying and saying that she hit him), they will eject the woman with no questions asked, nor will they answer any questions. —PatriciaTehan

2008-01-29 12:16:01   I went here pretty soon after they opened and was extremely impressed with the decor. It does look amazing inside. But that's where the good part ends. My friend and I ordered drinks and waited for our friends to show up. When our friends showed up, it took more than a few minutes for the bartender to take their order. He was too busy talking to some women at the other end of the bar. I have to note that this was a weeknight and we were the only in people in the place besides the 2 other women at the bar. To make matters worse, they turned on SportsCenter, drowning out their otherwise great music. I've never been back. —MarcVera

http://www.princerealtyofrochester.com/ The only two agents at that realtor are the two owners of Two89. —LanceReed

2008-03-21 09:32:20   I remember when this used to be Lloyd's. It looks a bazillion times better from those days. I found the prices to be a bit high. I didn't experience any of the problems most people who posted did but it I didn't get a good vibe the 2 times I have gone there. I am much more comfy at Matthew's or Salinger's. —DianaLicata-Wright

I enjoy Tim Tompkins bar One much better, but he did a nice job on Two89 for what it is. If you are 18-26 then this is a great spot, once you are older than that you are probably out of place.

Two89 is a small step up from a Ronnie Davis bar. Try it once and deem it. —MrRochester

2008-03-21 10:25:44   I've only been to Two89 once (last month), but I had a good time. It wasn't like being at the bar at Max, but it's pretty nice and much, much better than it's previous incarnation, the Jungle. Sure, the prices aren't great, but it is east & alexander. Everything is expensive. It's a fun place to dance and have a drink. —SaraChristine

2008-04-08 08:52:24   I really love the atmosphere at two89. The layout is great, the crowd is young, people are beautiful. This place is hot, especially for dancing, and especially at the end of the night. This place is definitely not for meat-heads like the crowd at Vinyl.

I haven't heard many good reviews of the new boys night out on Wednesday nights, but I don't care, I'm working on changing that :-) —MichaelDelaney