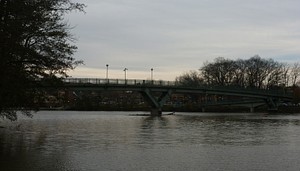 The original bridge. Taken from the River Campus side, with Brooks Landing visible in the background. (Nov. 2012) 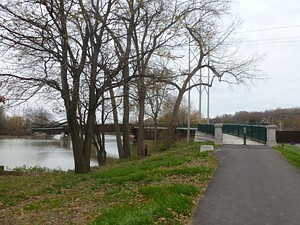 The second bridge, properly called the

Erie-Lackawanna bridge, opened in July 2012. Originally a railroad bridge, it extends from Wilson Boulevard near Jackson Square (formerly known as the Towers) to the Genesee River Trail in PLEX. It was completed as part of the Brooks Landing Project to link students living in the new Riverview Apartments to the River Campus, and to provide the UR community with an easy bicycle route to downtown.