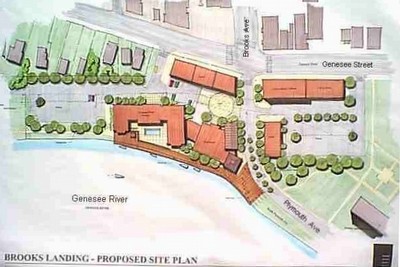 The Brooks Landing Project is a redevelopment project centered on the intersection of Brooks Avenue and Genesee Street in the 19th Ward. Parts of it are located in the adjacent Plymouth-Exchange Neighborhood as well. The project includes an 80 room Staybridge Suites hotel, as well as a new retail and office building in part occupied by the University of Rochester, Boulder Coffee Co. and additional retail space along Genesee Street. A pedestrian bridge linking the UR River Campus to Brooks Landing had already been built in 1991; a second bridge, called the Erie-Lackawanna bridge, was opened in July 2012 as part of the Project. The overall goal is to create a "college town" environment in an area directly across from the University of Rochester (connected by the footbridge) while meeting needs of neighborhood residents and tourists.

Another major part of the project is the boardwalk along the Genesee River. This includes boat docking facilities, improvements to the biking/walking trail, and amenities such as benches, and historical markers.

Site work began in September 2006. The hotel was completed in November of 2008. Construction of the office and retail complex began in the May 2008. The nearby Riverview Apartments, built at the same time, provide housing for 600 University of Rochester students.

All Previous construction was completed in 2010.

In 2012 plans were announced to build an additional 11 story dormitory called the Flats at Brooks landing next to the Staybridge Suites and a Visions Federal Credit Union at the corner of South Plymouth Avenue and Genesee Street. Construction on the tower began in July 2013 and was completed during the 2014-15 academic year. The Credit Union was never built.

The Brooks Landing project would use about 1.4 acres of the 802-acre Genesee Valley Park. To make up for that, the city proposes expanding Turning Point Park on the north side by more than 19 acres, most of it marshland and open water.

The aim is not just economic development in the 19th Ward, but to tie UR into the city more, "so there will be a purpose to go over that bridge," said City Council President Lois Giess.

"Most universities have what is called a college town or a university town, a retail area which immediately surrounds it," he said.

"We don't. We'd like to see one and we see Brooks Landing as possibly the first steps in the development of exactly that type of ultimate outcome."

What's next: Street construction on South Plymouth Avenue will be completed, along with utility relocation and some environmental remediation along an old railroad right of way. Then construction can begin, possibly next spring, on the promenade, boat docks, restaurant, hotel and parking lot.


2006-06-06 23:01:04   There is now a big pile of dirt next to the old NET office and alon a significant chunk of what used to be Plymouth, but otherwise, there has been no visible progress. —DaveMahon

2007-01-11 20:41:11   Visit the corner of Brooks and Thurston on a Thursday or Friday night and check out the posters on the windows. And the crowd at the bar. I don't think gentrification is an immediate concern. —DaveMahon

2007-06-06 21:21:26   The pilings are finished and actual vertical walls have started to appear. You can see them from Plymouth and from the foot bridge. —DaveMahon

It can be a fine line between "vitality" and "gentrification," but I feel confident that this development will not cross it. There is a genuine desire to preserve and enhance what the neighborhood already offers, in keeping with the unique 19th Ward spirit that I've heard about for years. —ChelseaAllinger

You're referring to Riverview Apartments.

Wait, why is the picture of Riverview Apartments and not Brooks Landing? —DaveMahon

2007-10-27 15:35:29   As a resident in the Strong neighborhood, I am concerned that the natural scenic beauty of the river is being compromised. The river is a public good, it belongs to all of us, not a hotel or corporation or even the UR. The 19th ward has always been a middle class neighborhood and it is still a good place to live, despite the increase in crime and violence. There have been problems with drugs there for decades - it is nothing new. As you walk or ride a bike along the river path on the UR side, you see only the beautiful river, trees, a restive calming view. Please don't ruin it with ugly condos. I hope these will be set back from the river and the river edge and all areas of Genesee Valley Park will always be accessible to the public. The area in the bend at the foot of Brooks Ave used to be a rapids before the Court St. dam was built. ARe they going to dredge the river to have a marina? —CarolLucky

They're patrolling the neighborhood, but pedestrians should use caution, stay alert, and travel in groups when possible. —DaveMahon

2009-02-10 16:43:28   Grand openining celebration was held on November 10, 2008 for Boulder Coffee at Brooks Landing, 88-room Staybridge Suites hotel, boardwalk and boat docks. Office building across the street with new retail spaces is under construction and will be completed in the spring. Restaurant is still in the planning stages. —DanaMiller